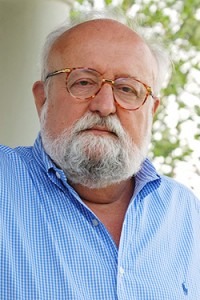 For Krzystof Penderecki, born on 23 November 1933 in Dębica, Poland, music is a fundamental and essential part of the human condition. He started writing music when he was six, and since then, his whole life as an artist has been a never-ending search for self- expression. To this very day he writes music every day. It’s like a drug, he says, “I simply must have it!” One of the most versatile, multi-faceted and stylistically diverse composers of modern times, Penderecki has experimented with serialism, tonality, non-traditional means of expression and new techniques before settling on a Post-Romantic symphonic idiom. His music is a musical synthesis of “everything that has ever happened in music,” and his fertile exploration of traditional musical language has continued to yield highly rewarding works well into the new millennium. And that includes 4 operas, 9 symphonies and orchestral pieces, a variety of instrumental concertos for an even larger variety of instrumental combinations, vocal settings, as well as chamber and solo instrumental works.

Commissioned to celebrate the 3,000th anniversary of Jerusalem as the capital of the Jewish state in 1996, Penderecki’s Symphony Nr. 7 subtitled “The Seven Gates of Jerusalem” makes overt geographical and spiritual connections to that city. In fact, the number 7 takes on a structural and quasi-ritualistic significance in this work. For one, it relates to the architectural planning of the holy city. Suleiman the Magnificent built eleven gates in the walls of the old city, but only seven are open, with the eighth reserved for the Messiah. The work unfolds in a seven-movement structure, and 7-note phrases and motifs provide internal cohesion. And let’s not forget the seven concluding fortissimo chords in the seventh movement of the composition. Scored for five soloists, speaker, three mixed choirs and orchestra, Penderecki carefully shaped the verbal content of the work, taking Latin and Hebrew texts from the Psalms and from the Old Testament. This process of selection provides an essential focus on the text, rather than carry along verses for the sake of completeness. Calling to mind various aspects and spiritual associations of the city, much of the selected texts suggest an internal dialogue that places prophetic statements alongside adulations from the psalms.

Critics and musicologists see the work as representing a “fusion or confluence of the twin threads of choral and symphonic composition.” The connection to the choral symphony of the 19th century—with particular reference to Mahler’s 8th—is indeed credible as Penderecki uses voices throughout the work. Achieving an exciting fusion of ancient and modern, “the musical vocabulary is patently modern, yet its animating spirit is ancient and timeless. Much of the music seems ritualistic and potent with extra-musical meaning.” Particularly the first and last movements impose monolithic music that alternates blocks of sounds and instrumentation within a sparse and contrapuntal texture. Conveying a sense of solidity of structure—and unfolding in the style of Gregorian chant—the musical textures also contain distantly related sounds that suggest vast musical spaces. The second and fourth movements make prominent use of the repeated 7-note phrase, and the five soloists add a celebratory and radiant sheen. While the choir exclusively sounds the third movement “De profundis,” the 5th Gate “Lauda Jerusalem” features a central pastoral section of exceptional orchestral beauty. A narrator chanting in Hebrew invokes fantastic images of the Old Testament, and the bass trumpet represents the world of God in the 6th Gate. The choir forcefully initiates the final movement—restating literary and musical materials from previous sections—and the work concludes with a powerful and jubilant affirmation. Penderecki writes, “I have spent decades searching for and discovering new sounds. At the same time, I have closely studied the forms, styles and harmonies of past eras.” The 7th symphony is a creative synthesis of his lifelong devotion to music and simultaneously a sounding monument to his devout spirituality.