Quizzes
Conductors as Players II – On What Instruments Did These Conductors Make Their Names?
by Maureen Buja August 21st, 2021

Before conductors find their place, they have other roles in the world of music. Usually, they’ve started their careers on one musical instrument before finding that standing on the podium is a much more interesting job. Can you guess what instrument each of these conductors first took the musical stage playing?

1. This American conductor was a mentee of another famous American conductor, Leonard Bernstein. As a student at the Juilliard School, she played with the New York Philharmonic and the New York City Ballet Orchestra. It was at Tanglewood, however, that she met and was forever inspired by Bernstein. Her conducting appearances have taken her all around the world – leading the Royal Scottish National Orchestra, the City of London Sinfonia, the São Paulo Symphony Orchestra and others. She was being appointed Principal Conductor of the Bournemouth Symphony Orchestra. Her current appointment is as Music Director of the Baltimore Symphony Orchestra. Before her conducting career, though, were bachelor’s and master’s degrees from the Juilliard School. What instrument did Marin Alsop play as a student? 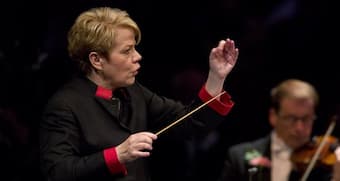 
2. Best known to many classical music fans from his appearance in the Disney film Fantasia, this British conductor took the helm of the Philadelphia Orchestra in 1912 and remained as its music director until 1938. Under his guidance, the Philadelphia Orchestra was the first symphony orchestra to make electrical recordings and the first to appear on a commercially sponsored radio broadcast. With the orchestra, he created “the Philadelphia sound,” and the now-standard orchestral seating of violins on the left and the violas and cellos on the right was his creation. However, before he took the podium, he had another career in music. Which instrument did Leopold Stokowski use to wow his audience? 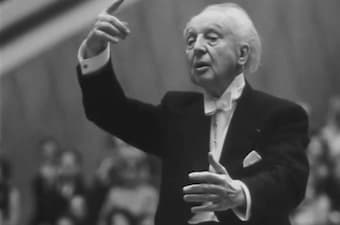 
3. This Korean-born conductor’s first instrument was the piano and started her conducting career in Korea after completing her studies on her instrument at the Juilliard School. As a performer, she made recordings with the London Symphony Orchestra. As a conductor, her first appointment was a music director with the Qatar Philharmonic Orchestra, and she is now chief conductor of the Trondheim Symphony Orchestra. What was the original instrument upon which Han-Na Chang made her career? 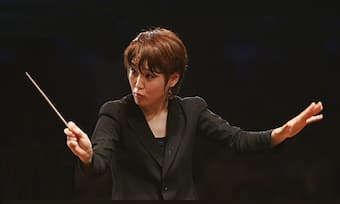 4. This Finnish conductor is not only a performer and conductor but also a composer, with over 340 symphonies to his credit. With his flowing white hair and beard, and his high energy on the podium make Leif Segerstam immediately recognizable. He first took the podium in 1963 and was appointed conductor and later artistic director of the Royal Opera in Stockholm. He was chief conductor of the Helsinki Philharmonic Orchestra from 1995 to 2007 and now guest-conducts all over the world, appearing with the Chicago Symphony, the Los Angeles Philharmonic, the Toronto Symphony, the Royal Liverpool Philharmonic Orchestra, and the Symphony Orchestra of the State of São Paulo, among others. On what instrument did this energetic conductor make his debut in 1962? 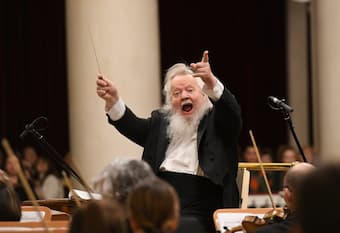 
5. This American conductor studied in New York at the Mannes College of Music and later the Juilliard School. Her appointment as music director of the Buffalo Philharmonic Orchestra in 1998 was a notable first: she was the first female conductor to lead a major American ensemble. She was also the principal conductor of the Ulster Orchestra in Ireland from 2011 to 2014. As a conductor, she has been a champion of American music and has won 3 GRAMMY Awards for her work as well as numerous conducting prizes. However, in her early days, JoAnn Falletta made her career as a performer on what music instrument, and was the musician on call for the Metropolitan Opera and New York Philharmonic for pieces that required these instruments? 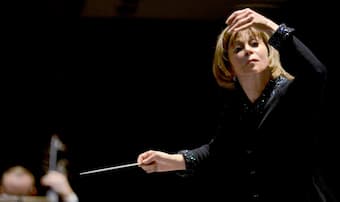 a. Viola d’amore and hardanger fiddle
b. Guitar and mandolin
c. Bassett horn and Eb clarinet
d. Celeste and glockenspiel


6. This Argentinian-born conductor has strong ties with Israel and Israeli performers following his parent’s move to that country when he was 10. He gave his first concert on his instrument in 1950, when he was seven, and started his conducting classes when he was age 13. He started his conducting studies with Igor Markevitch and later studies harmony and composition with Nadia Boulanger in Paris. He made his conducting debut in 1966 and since 1992 has been music director of the Berlin State Opera and the Staaskapelle Berlin. He started serving as music director of La Scala in 2011. With what instrument did this child prodigy make his debut; he continues to perform on this instrument and in 2017, working with a leading musical instrument maker, created a modern rethinking of this instrument. 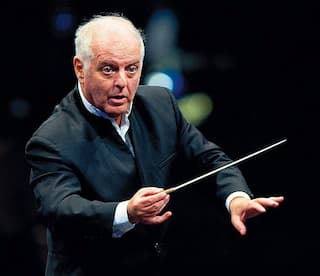 
7. This American conductor was best known for her work in opera, first as head of the Boston University opera workshop and then as founder of the Boston Opera Group, later the Opera Company of Boston. In Boston, she often conducted the American premieres of operas that had already made their name abroad, including Berg’s Lulu (U.S. East Coast premiere), Schoenberg’s Moses und Aron (U.S. premier), Berlioz’s Benvenuto Cellini (U.S. premiere), among many others. She was the first woman to conduct at the Metropolitan opera and the second to conduct the New York Philharmonic. As an instrumentalist, Sarah Caldwell made her public debut at age 10, but on what instrument? 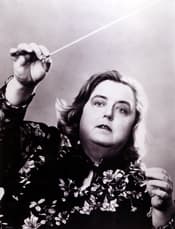 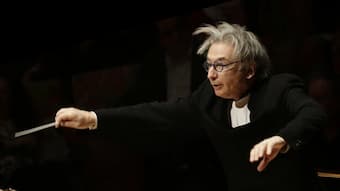 
9. This French conductor first studied on her instrument with her mother and then at the Nancy Conservatoire. As a conductor, she counts Jorma Panula, Seiji Ozawa, and Simon Rattle as her mentors and founded the chamber orchestra Orfeo 55, with which she both performs and conducts. In 2017, she became principal guest conductor of the RTÉ National Symphony Orchestra in Dublin, Ireland, and in 2018, was appointed chief conductor of the Kristiansand Symphony Orchestra in Norway. Her most important appointment has been as principal guest conductor with the Philadelphia Orchestra, the first female conductor ever named to this post in Philadelphia. With what instrument did Nathalie Stutzmann’s first make her name? 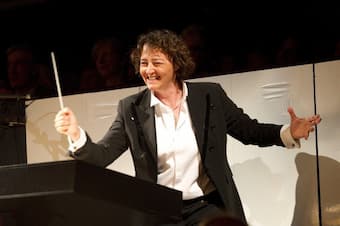 10. This Swiss conductor graduated from the Conservatoire de musique de Genève, where he was awarded first prize in conducting. His conducting debut occurred in 1957 with an orchestra of Radio Lausanne. He was conductor of the Berny Symphony Orchestra from 1967 and in 1977 became the artistic director of the Montréal Symphony Orchestra (OSM). Under his leadership, the OSM became one of the most recorded orchestras in the world and he was also a champion at OSM of Canadian Music. From 1991 to 2001, he was Music Director of the Orchestre National de France, and from 1998 was music director of Japan’s NHK Symphony Orchestra. As an orchestral player, Charles Dutoit made his debut in 1957 on this instrument, playing in several European and South American orchestras. What was his instrument? 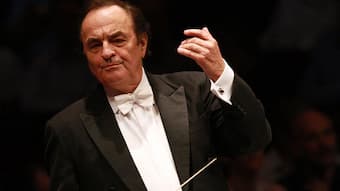 5. b. Guitar and mandolin