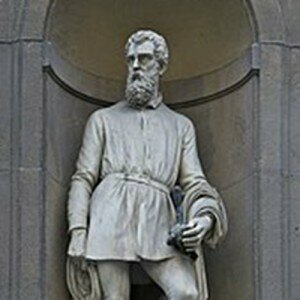 For all his dislike of Italian music, Hector Berlioz (1803-1869) kept returning to Italian subjects. We only need to think of Romeo and Juliette, Harold in Italy, and the opera loosely adapted from the memoirs of the 16th century Florentine sculptor and goldsmith, Benvenuto Cellini. The story tells of Cellini’s love for Teresa, daughter of the Papal Treasurer Balducci. His rival, the Papal Sculptor Fieramosca, overhears Cellini plotting to run away with Teresa during the carnival. Fieramosca persuades a friend to impersonate Cellini, and Cellini kills the imposter. The Pope—recast as a Cardinal in the opera—remembers that he commissioned Cellini to make a bronze statue of Perseus, a task Cellini had forgotten in his anxiety to capture Teresa. When the Cardinal threatens to give the casting of the statue to someone else, Cellini promises that he will break the rival statue, even if it were made by Michelangelo. The Cardinal gives Cellini the option of casting the statue in record time, or of being hanged for murder. Cellini throws all his priceless metal statues and figures into the furnace to cast the Perseus statue, and all ends well. 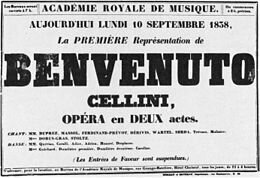 Poster for the first performance of Benvenuto Cellini

Berlioz had worked hard to secure a reputation for himself in Paris. As such, when Benvenuto Cellini premiered on 10 September 1838, he was poised for success. During the last rehearsals, the musicians applauded several parts of the music, “and some even declared my work to be one of the most original they had ever heard.” In the event, Berlioz was sorely disappointed. He wrote, “the overture was greeted with exaggerated applause, while the opera itself was hissed with admirable energy and unanimity.” The opera closed after a further three performances, and Berlioz revised the second act for a revival by Franz Liszt in Weimar in 1852. It received no more than a lukewarm reception, and Berlioz wrote, “I was unlucky as to think these episodes offered an interesting and dramatic subject for an opera.” While the “Overture” continues to have a strong presence in the concert hall, the opera is all but forgotten “I cannot help recognizing,” Berlioz writes, “that it contains a variety of ideas, an energy and exuberance and a brilliance of color such as I may perhaps never find again, and which deserved a better fate.”