In Tune Arts
Composers and Their Poets: Wolf I
by Maureen Buja December 23rd, 2016 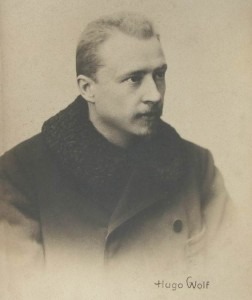 If Schumann had his song year of 1840, then Hugo Wolf (1860-1903) had his song year of 1888. He had been a song composer long before this, and, as were most song composers in the years between 1855 and 1880, was very much in the mould of Schumann. He wrote songs which were piano pieces with accompanying vocal lines (such as his song Morgentau), he used the same poets that Schumann had, primarily Heine; his songs had long piano postludes, as modeled on Schumann; and even set some of the same texts as Schumann, although with a vastly different result. Early Wolf songs are compositional embarrassments of poor part-writing and unconvincing attempts at chromaticism. Nevertheless, by 1888, he was a much better composer and started to write in the genre for which he became best known.

The Mörike-Lieder are settings of the poetry of Eduard Mörike (1804-1875), a German Romantic poet. Wolf began setting the poet’s work in 1886, and set more of his poetry to music than any other composer. Mörike’s poems are simple and clear, but not simplistic. In some cases, his poetry has been mistaken for folk poetry, so much a part of the country’s language has it become.

One poem on ghostly themes is Die Geister am Mummelsee (The Sprits at Lake Mummel), perfect for the Romantic morbid fascination. The ghosts rise at midnight: there’s a funeral cortege, a woman in a coffin, and a green tint to the waters. Before the last verse, the entire accompaniment changes as the poem describes the water’s sparkle and glow, a ghostly mist arises, and our poet seems to run away, and the music runs with him.

Wolf: Mörike-Lieder: No. 47. Die Geister am Mummelsee (Christianne Stotijn, mezzo-soprano; Joseph Breinl, piano)
A more playful setting is the Elfenlied (Elf Song). An elf awakens in the middle of the night, sees a glow on a wall and creeps up to peer in a window and see the wedding feast, but instead hits his head on the wall – it was only a glowworm and a lot of imagination. We conclude with the poet telling us the elf is crazy: Gukuk! (Cuckoo). Listen for the bird imitation at the end.

No. 16. Elfenlied
In 1888, Wolf also took up the poetry of Joseph Freiherr von Eichendorff (1788-1857). Eichendorff held a seminal position in the new Romanticism. His novella, Aus dem Leben eines Taugenichts (Memoirs of a Good-For-Nothing) tells the story of a miller’s son who rejects his familial career, becomes a gardener, falls in love with a nobleman’s daughter who is out of his class. He flees to Italy and then returns and discovers she was adopted, and therefore he could marry her. A love story across class and country boundaries, it was the kind of story that the period loved. The use of dream symbolism mixed with realism, and wanderlust and love, became standards of the Romantic genre. 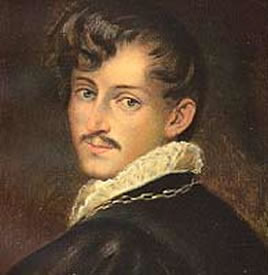 His poetry ranged over a great variety of styles but he was best known for writing poetry that was more like folk songs. In poem after the poem, the poet seeks love while maintaining his freedom: “But if she speaks of marriage, / I’ll leap onto my horse – / I’ll stay free” (from Der Soldat) is a typical sentiment.

One song that looks at the evening a different way is song 8: Nachtzauber (Night magic). The poet speaks of hearing the water running between the stones and we hear that in the delicate piano line. The night descends from the mountains and we hear the vocal line rise and then descend. Flowers bloom in the moonlight, the nightingale sings, and it all closes with a lament for all that has been lost, now that the poet has been fatally wounded by love. The song has flowing lines and abrupt stops and we can see just what fine control Wolf has gained over the poetry and its declamation.

Wolf: Eichendoff Lieder: No. 8. Nachtzauber (Ian Bostridge, tenor; Antonio Pappano, piano)
Compare this with the sturdy march in Unfall (Mishap). Our poet is walking in the countryside and is confronted by an armed youth. The poet runs at him and falls and the youth shoots him and laughs: it was Cupid and ever since then, the poet had had no end of problems. The irony comes through perfectly.