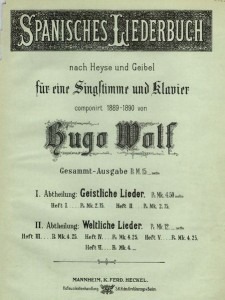 Wolf took up the poetry of Goethe and in his Goethe-Lieder collection, set 51 poems. They came from a variety of poetic sources, including the influential Wilhelm Meisters Lehrjahre (1795-96) and the wonderfully named West-östlicher Diwan (1819), as well as a large number of independent poems that didn’t appear in regular collections.

The importance of Goethe to the literary and musical world of Germany cannot be understated. In setting his poetry, Wolf was just as much making a statement about his own seriousness as a composer as using the most important poetry of his time as his source. For so many composers, Goethe’s works were a springboard to their imagination: how do you depict a father rushing to bring his ill son to safety? How do you depict the musings of a woman for her lover while she’s doing routine work?

For Wolf, the challenge of setting Goethe was also made harder by his own desire to set poetry few others had set. He didn’t set Erlkönig, which had been set by over 25 other composers in addition to Schubert. He set poems such as Ritter Kurts Brautfahrt (Kurt the Knight Rides to His Betrothal), which had no prior settings. It’s a funny story: of a knight on his way to his beloved but who is beset by all those things that bother knights: an adversary who must be fought, a desirable woman who entices him, before he’s detained by the courts pursuing him for unpaid debts, and so he never arrives to his betrothal.

Wolf: Gedichte von J.W. von Goethe: No. 12. Ritter Kurts Brautfahrt (Dietrich Fischer-Dieskau, baritone; Daniel Barenboim, piano)
The Spanisches Liederbuch, begun in 1890 and completed in 1891, was a departure for Wolf as it included both secular and sacred songs. The 44 poems in the collection were translated by Emanuel Geibel and Paul Heyse. The poems came from Spanish sources and proved to be popular with composers, being set by Robert Schumann (20 poems), Johannes Brahms (1 poem), and Wolf (entire set of 44).

Wolf first set the 10 sacred poems, the best known of which is No. 3, Nun wandere, Maria. The original text is by Ocaña from around 1600, translated by Paul Heyse, and is a monologue by Joseph, encouraging Mary to continue on despite her pregnancy pains, as “….we’ll soon be arriving in Bethlehem.” Heyse only translated 14 of the original 18 lines of the poem, omitting lines 13-16. 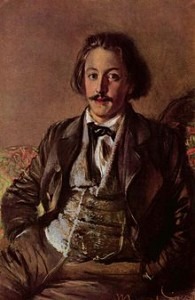 Wolf: Spanisches Liederbuch: Geistliche Lieder: No. 3. Nun wandre, Maria (Dietrich Fischer-Dieskau, baritone; Gerald Moore, piano)
In the second part of the collection, In dem Schatten meiner Locken is the best known song. Heyse’s translation is of a Spanish poem by ‘anonymous.’ In the poem, a woman looks at her sleeping lover who lies ‘in the shadow of her hair.’ She combs her hair and the wind disarrays it again. As she gazes at him she reflects on his sometimes nagging nature. Wolf has to deal with an internal thought process, interrupted by the wind. Her thoughts, as do most people’s internal thoughts, shift quickly from one thing to another – her hair, the wind, etc.