Master of the Queen’s Music 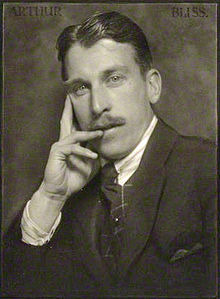 To commemorate the musical achievements of Sir Arthur Edward Drummond Bliss (1891-1975) a noted musicologist suggested, “Of the smaller stars that shone in the ample firmament of twentieth-century English music, the light that coruscated with the greatest brilliance was Sir Arthur Bliss.” Born in a suburb of London, Bliss studied classics at Cambridge, and took music lessons from Charles Wood. He enrolled at the Royal College of Music in London in 1913 and found ample encouragement from Edward Elgar. However, the outbreak of First World brought his musical education to an abrupt stop. He fought in France, and was twice wounded and once gassed. His younger brother Kennard was killed in the war, and the music scholar Byron Adams writes, “Despite the apparent heartiness and equilibrium of the composer’s public persona, the emotional wounds inflicted by the war were deep and lasting.”

Following the war, Bliss officially launched his musical career with a number of bold ensemble works that gained him a reputation as an avant-garde experimentalist. His modernist tendencies were confirmed by his first major orchestral work A Colour Symphony, written between 1921/22. The work was well received, and Bliss was called “far and away the cleverest writer among the English composers of our time.” For music critics, the symphony confirmed “Bliss’s transition from youthful experimenter to serious composer.” His marriage to American Gertrude Hoffmann softened his musical language, and Bliss left the influence of Stravinsky and the French modernists behind. “After early enthusiastic flirtations with aggressive modernism,” according to a music critic, “Bliss admitted to a romantic heart.” His compositions appeared with some regularity in the concert hall, but he also scored celebrated music for film and the ballet. Yet, in the early 1930s, his memories of the carnage of the trenches found musical expression in the profound choral symphony Morning Heroes. With this work, according to Bliss, “he exorcised his own horrific memories of action in the First World War.”

With his expansive and highly musical scores, Bliss was widely considered Elgar’s natural successor. However, with the meteoric rise of William Walton and Benjamin Britten in the late 1930s, his music began to be seen as old-fashioned. During the initial years of World War Two, Bliss taught at the University of California but returned to England to work in the Overseas Music Service of the BBC in 1941. The following year he was appointed BBC’s Director of Music, and was knighted in 1950. When Sir Arnold Bax died in 1953, Bliss took over as Master of the Queen’s Music. Undeterred by extensive administrative obligations, Bliss continued to compose a number of impressive works. His Piano Concerto was composed for Solomon Cutner, the Violin Concerto for Alfred Campoli, and the Cello Concerto for Mstislav Rostropovich. His only attempt at a stage opera, The Olympians dates from 1949, and proved only moderately successful. Yet, he produced a number of impressive orchestral scores, including the Meditations on a Theme of John Blow and the late Metamorphic Variations. His last major work was the cantata Shield of Faith, completed in 1975. Bliss had no inflated ideas about his importance as a composer. He was a modest man, and when he received the Gold Medal of the Royal Philharmonic Society in 1963, he said, “I don’t claim to have done more than light a small taper at the shrine of music. I do not upbraid Fate for not having given me greater gifts. Endeavour has been the joy.”