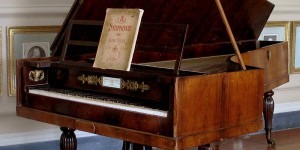 The Alec Cobbe collection, housed at Hatchlands Park, near Guildford, Surrey, England, holds pianos owned by a number of different composers, such as Haydn’s Longman & Brodrip piano; Mahler’s 1836 Graf piano; Elgar’s 1844 Broadwood piano; Chopin’s 1848 Pleyel, used for his last concert in Paris; and Chopin’s 1847 Broadwood English Grand piano, chosen by Chopin for use in his English recitals; and Halévy and later Bizet’s 1855 Roller composing table piano, where the top of the piano case is a leather desk.

Why would there be an interest in a composer’s piano, mass produced and anonymous? It can tell us much about how a composer worked, for example, Mahler’s piano, even though he bought it second-hand, shows how he changed the hammer covers, adding strips of lead to the lower register, so that he could have a more percussive sound. More indicative, however, is that his piano works conform to the restrictions of the instrument. It had a small range of 6 ½ octaves (a modern piano is 7 octaves plus 4 keys (88 keys)) and, despite purchasing a newer piano, all of his piano music falls within the smaller range of his Graf, he wrote with his original piano in his mind. 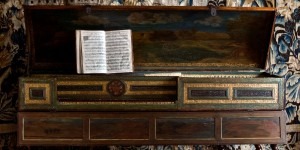 What’s unusual about this collection is the fact that all instruments are maintained in playing order – this isn’t a museum of formerly live objects, but a collection of living sounds. There are concerts on the instruments in the summer and autumn and other concerts held throughout the year.

We’ll look more at these instruments in detail in future pieces, but for now, make your summer plans to include some music as the composers who wrote it, heard it.