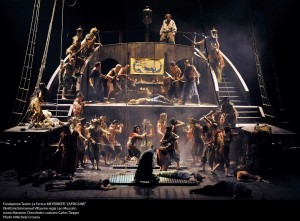 It is prohibitively expensive to stage an opera. In 2012 alone, the Metropolitan Opera in New York had expenses totaling 317 million US Dollars! For one, you need singers, an orchestra of roughly 80 players and a conductor. Some popular works by Verdi and Puccini also sport big choruses, and nowadays well-known artists command huge fees. But star singers are not the main cost of mounting an opera. That honor falls to production costs, particularly the sets, props and costumes. Of course, some productions revive and are used over and over again, but opera is still regarded as a lavish entertainment for snobs, draining tax money away from the many to pander to the tastes of the few. And if you are a composer like Giacomo Meyerbeer, who composed music for some of the most lavish operatic productions ever, your chances of bringing it to the stage are minimal.

Giacomo Meyerbeer: Les Huguenots, “Danse bohemienne” (Gypsy Dance)
Did I mention that the tradition of the “opéra-ballet” required the inclusion of dance in the operatic scenario? In Meyerbeer’s Les Huguenots of 1836, the “Gypsy Dance” interrupts the third act with lots of fortune telling and even more hip movement! The opera is based on the tragic events of the St. Bartholomew’s Day Massacre of 1572, when Catholics killed thousands of French Huguenots in an effort to get rid of all protestant influences in France. The rest of the opera, including the ballet scenes and the love story between the Catholic Valentine and the Protestant Raoul was the creation of Eugène Scribe, the most famous French dramatist and librettist of the 19th century. 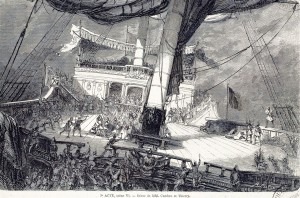 In Les Huguenots we find the dancing gypsies, but Le Prophète features a ballet on roller skates that took advantage of this latest sports craze! Electric lighting effects created powerful onstage illusions—and added a substantial electricity bill—and Meyerbeer complained that the spectacle was pushing his music into the background. Meyerbeer was clearly concerned, as singers were the central focus in the conception of his operas. He frequently composed his works with specific performers in mind, and if a singer canceled and no suitable substitute available, he would abandon the whole project. When Meyerbeer first heard the contralto Pauline Viardot-Garcia, he immediately expanded her role in Le Prophete and reduced the importance of the tenor.

Giacomo Meyerbeer: L’Africaine (The African Woman), “Tralala! Ecoutez”
Not unlike late Beethoven or Belioz, Meyerbeer was one of the first composers to deliberately create “unbeautiful” sounds. The entire role of “Nelusko,” a vindictive slave in L’Africaine, is composed with unusual orchestration and instrumental effects. It is clearly designed to express the emotional turmoil of the character rather than being concerned with producing a sensuous sound. Meyerbeer was constantly trying out new instruments, from the bass clarinet to the saxophone in order to escape the customary opera orchestra. Richard Wagner learned much from Meyerbeer’s experiments, including how to successfully blow the budget with lavish productions. The sinking of Vasco da Gama’s ship onstage in the Finale of Act 3 of L’Africaine caused a public sensation, and was promptly copied by Wagner in the Flying Dutchman. Meyerbeer’s grand operas are severely neglected! It’s not a case of bad music, drama or being denigrated by loudmouth Wagner, but simply the fact that they are just too expensive for our budget-minded times—with the notable exception of a few brave opera houses—to be properly staged.