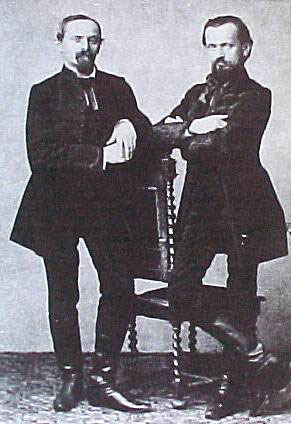 Albert Franz Doppler (October 16, 1821 – July 27, 1883) was a flute virtuoso and a composer. Born in Lemberg, Franz received flute lessons from his father Joseph Doppler, who was an oboist, and made his debut as a flautist at the age of 13. Franz formed a flute duo with his brother Karl, and they became quite a sensation throughout Europe.

In 1838, both became members of the orchestra of the German Theater in Budapest. At the age of 18, Franz was already the first flautist at the opera. Three years later, the two brothers moved to the Hungarian National Theater, where five of Franz’s operas were staged with success.

Rigoletto Fantaisie, Op.38
Franz and Karl continued to make regular tours of Europe and helped found the Hungarian Philharmonic Orchestra in 1853. In Vienna Court Opera, Franz went on to be the first flautist and stand-in conductor, and eventually chief conductor, as well as acquiring a position of Professor of Flute at the Vienna Conservatoire from 1864–67.

Franz composed chiefly for the flute, such as concertos, showpieces, and many flute duets to be played by him and his brother Karl. His music contains that of Russian and Hungarian aspects. Franz also wrote fifteen ballets and seven operas, which were quite popular in their time, including his only German opera Judith, and a Russian work entitled “Benyovsky”.

Being a brilliant orchestrator as well, Franz is best known for his orchestral arrangements of six of Franz Liszt’s Hungarian Rhapsodies. Liszt was just learning to orchestrate at that time, and he assisted Franz in these orchestrations. Franz’s transcriptions of some of the rhapsodies for flute are also quite well known.
Valse di Bravura Op.33
Karl Doppler
6 Hungarian Rhapsodies No.3 in D Major Liszt Arranged by F.Doppler

Karl Doppler, the younger brother of Franz Doppler, was born on September 12th, 1825 in Lemberg. He took music lessons with his father and brother, and went on tours with Franz through Brussels, London and Paris at a very young age. Being left-handed, Karl played the flute on reverse. This added an optical effect to the concerts with his brother.

Same as Franz, Karl was also a composer and a great flautist. Before 1865, he was the musical director at the Theater of Budapest. From 1865-1898, Karl held the position of conductor at the court chapel in Stuttgart. The major works of Karl are operas such as A Gránátos tábor (The camp of the grenadiers), a collection of Hungarian folk songs for dance and choirs, ballet music, as well as pieces for flute.