At the heart of every major European city is the cathedral. A cathedral is more than a mere church, it contains the cathedra, i.e., the seat of a bishop. A cathedral is the central church of a diocese and cathedrals have their own architectural forms, almost always in the form of an imposing building. It’s been noted that some cathedrals were created that seem out of proportion to the small size of the towns in which they might be placed.

We’ll start with an invisible cathedral. Debussy’s Prèludes, Book I, includes his mesmerizing audio image of the cathedral of the legendary city of Ys. The city, protected by a wall that kept out the ocean, was destroyed one day by the perfidious Princess Dahut, who, tempted by the devil, opened the sea door and flooded the city. In fleeing the city, Gradlon saved his daughter, but ultimately the sea claimed her, and she became a mermaid. Breton folk tales say that the bells of the cathedral of Ys can still be heard below the waters of the Bay of Douarnenez when it is calm and was the inspiration for Debussy’s prelude. 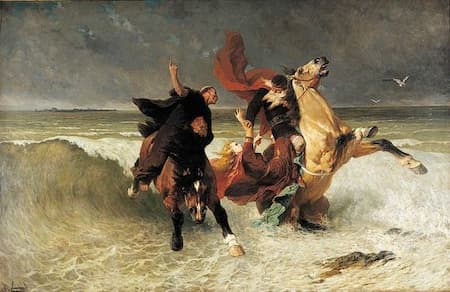 
In September 1850, Robert Schumann and his wife, Clara, took a river journey through Germany on the Rhine River. One of the remarkable buildings they saw on their trip was the cathedral in Cologne. Clara wrote in her diary: ‘We were enchanted … by the sight of the magnificent cathedral, which even on close inspection exceeded our expectations’.

Robert captured the trip in his third symphony, the Rhenish. It was in the fourth movement that he captured the solemnity and ceremony of the cathedral. Its tempo indication, Feierlich (Solemn), helps to set the scene for the ceremony in which an archbishop is made a cardinal. Of note is the pianissimo entrance at the beginning of low brass in a chorale. Counterpoint, imitation, and other techniques are used to expand the theme. 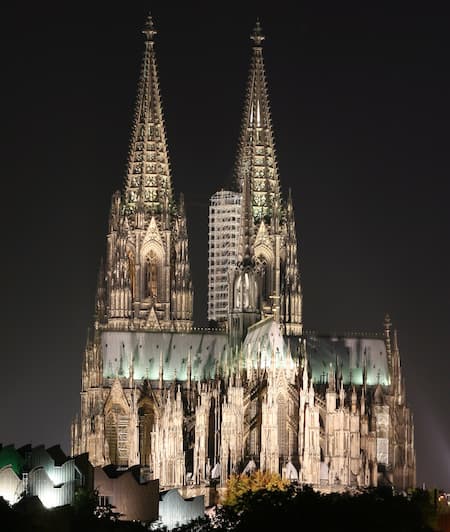 
One of the most striking images at the end of WWII was the ruins of the Frauenkirche in Dresden, a victim of the 13 February 1945 Allied bombing campaign.

A monument to Baroque architecture, its first function was a signal in 1726 to the newly converted ruler of Dresden that the citizens of Dresden would, defiantly, be staying Lutheran and not converting to Catholicism as he had done. Now, the reconstructed church is a symbol of reconciliation between the former religious enemies.

Following its destruction in WWII, the church remained a ruin for another 40+ years. In 1989, a citizens’ group came together to plan for its reconstruction. International aid started with sorting through the pile of rubble to determine which stones could be reused. Computer programmers in the US created an interactive virtual reality model of the church. The church was rebuilt following the original 1720s plans and today the church is again the symbol of the city. 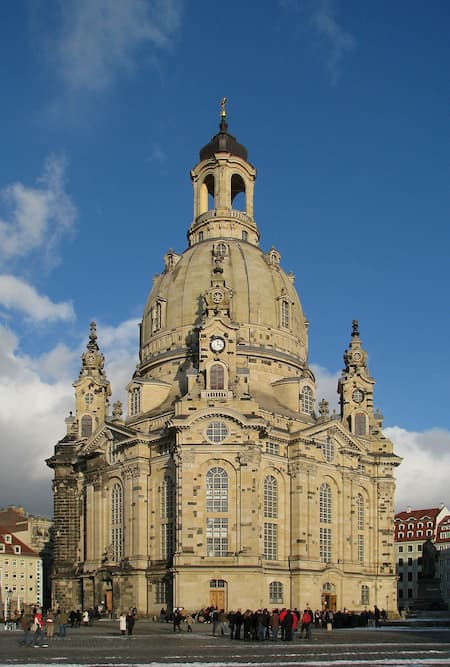 Czech composer Vaclav Trojan saw an image of this church (not a cathedral) and used it as the source for his work for accordion, The Ruined Cathedral.


Another shocking destruction of a cathedral occurred in 2019 when all of Paris, and the world, was electrified by the sight of Notre Dame cathedral in flames. Built over the years 1163-1345, this medieval cathedral was the symbol for Paris, even featuring in novels (Victor Hugo’s The Hunchback of Notre Dame). The building was known for its façade sculpture with its gargoyle rainspouts and the horned and winged beasts that kept watch over the city. Over the years, various parts of the church were renovated, including a major renovation in the mid-19th century, prompted by the interest raised in Hugo’s novel. It was during a 2019 renovation that the cathedral roof caught fire and burned for 15 hours – destroying the central spire and taking down the lead room and ceiling. Despite calls for replacing the building with a more modern design, the Assemblée Nationale passed a law in 2019 that the re-building must preserve the cathedral’s ‘historic, artistic and architectural interest. It is supposed to be open for the 2024 Summer Olympics in Paris. 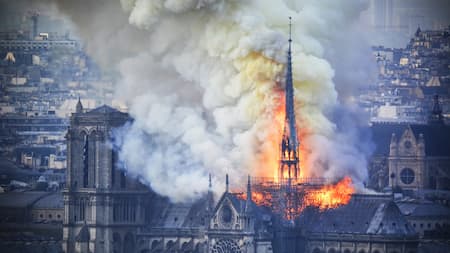 
The last cathedral we will listen to is still being built. The Catalan architect Antoni Gaudí (1852-1926) took over the construction of the cathedral in 1883 when he became chief architect. He transformed the project by including his distinctive flowing lines, blending Gothic (12th to 16th century) and Art Nouveau (19th and 20th century) forms. At Gaudí’s death in 1926, the building was perhaps a quarter done. The Spanish Civil War brought both delays and destruction of not only the building but also Gaudí’s workshop. In 2015, the chief architect announced the building was 70% complete and in 2010, the covering of the nave meant that the church could be consecrated for the use of the liturgy, and masses are held at least weekly at the church.

Gaudí was part of the Modernista movement in Spain and he developed a style based on natural forms. Unfortunately, he was not fond of making drawings, working instead from models, most of which were destroyed during the Civil War. The use of computers and computer-assisted construction techniques has enabled the building to move forward more quickly in the 21st century. Much of the former carving work that had to be done by hand on-site can now be handled by CNC machines off-site.

The building has been compared to a sand castle made of wet, flowing sand. The spires come up organically from the lower parts of the building, and the interior seems more tree-like than building-like. 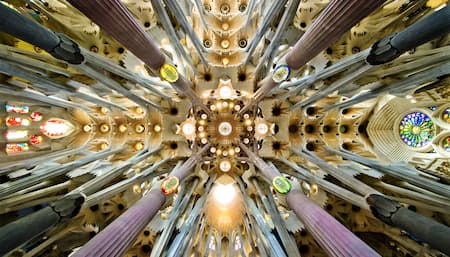 The Nave of Sagrada Familia, looking up

American composer Carter Pann (b. 1972) wrote Two Portraits of Barcelona in 1994 and its first movement focuses on the cathedral. This work ‘presents a gnarly, wicked picture’ of Gaudí’s creation. It seems to reflect both the difficulty of its founding, its construction, and the changes caused by the Civil War. 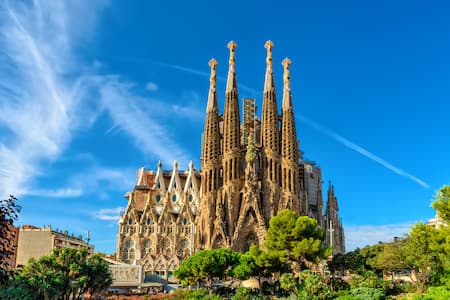 
Imaginary cathedrals, ruined cathedrals, monumental cathedrals – all have captured the vision and ingenuity of composers over the centuries. Composers have made different elements of the church important in their music: the bells and the organ or the ceremonies and the tragedies of their destruction. A cathedral is a complex structure – more than a building, it’s often a complex of structures, each with its own history and life. When we think of the Pisa Cathedral, we think more about its leaning campanile – the Leaning Tower of Pisa. When we think of the Florence Cathedral, we think more of the separate Baptistry with its extraordinary bronze doors, than of the cathedral itself. There’s enough in this far-from-simple structure to provide inspiration for everyone.