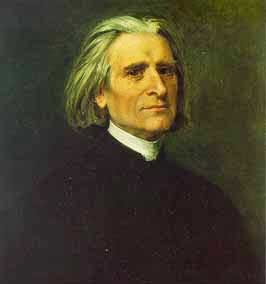 His first setting, Ave Maria I, S20, was written in 1846, when Liszt was coming to the end of his 8-year touring cycle of Europe. It is estimated that over those 8 years he appeared “well over a thousand times” in concert. The work is for 8-part choir and organ with a setting that changes actively in its texture, moving from solo voices to full choir, culminating in the final meditative ‘Amen.’

Liszt: Ave Maria I, S.20 (Radio Svizzera Choir, Lugano; Paolo Crivellaro, organ; Diego Fasolis, cond.)
His next setting came in 1862, written for a piano tutor Dr. Siegmund Lebert, entitled the Grosse theoretisch-praktische Klavierschule. The piece is also known as Die Glocken von Rom (The Bells of Rome). Liszt was in Rome in the 1860s following the failure of his attempt to marry Princess Carolyne zu Sayn-Wittgenstein, which was blocked by the Russian government (and her husband); his son Daniel died; and his daughter Blandine died. Liszt retreated to a monastery outside Rome in late 1862. The piece starts simply, but soon challenges the player to keep the melody distinct from the accompaniment. By the end of the work, the player is faced with challenges in performing at both ends of the keyboard pianisissimo.

Ave Maria – Die Glocken von Rom, S.182 (Philip Thomson, piano)
In 1870, Liszt took up the Ave Maria again, writing the same piece for 4-part mixed choir and organ (S38), for solo voice and organ (S681) , and for piano alone (S504). Liszt revised the piano arrangement in 1873 (S504/2), and created a truly magnificent work that pays homage to the subject matter, yet shows that this was written by the greatest pianist of his age. It starts with solemn chords and seems a more thoughtful piece than we’ve heard before. The rolling chords that begin at 03:00 force the pianist to keep the chords in motion while still playing the melody in an inner voice – something not to be accomplished easily!

Liszt: Ave Maria II, S.504 (Philip Thomson, piano)
Liszt wrote one more original Ave Maria in 1881. His final Ave Maria was written in 2 versions, one for voice and piano and another for piano solo. It’s almost as though this final Ave Maria encompasses all those that have gone before condensed into a final simple statement. Its beauty and quiet close leave us thoughtful and longing for that final closing chord.

Liszt: Ave Maria IV, S.545 (Philip Thomson, piano)
Liszt also made two arrangements of other composers’ Ave Marias. One was of Schubert’s ‘Ave Maria’ and the other was of the Ave Maria by Jacques Arcadelt, a Renaissance composer who was also a singer in the papal choir.

Arcadelt: Ave Maria (Lund Korallerna Girls Choir; Lund Cantores Cathedrales; Eva Svanholm Bohlin, cond.)
Liszt’s version keeps the contrapuntal clarity of the Arcadelt original and, at the same time, moves it forward into the 19th century by using the different octaves of the piano to create different choirs: high-voiced ones against the lower voices of the middle-range of the piano. It’s not as profound as his own compositions, but is still something that shows the fine hand of Liszt as arranger.