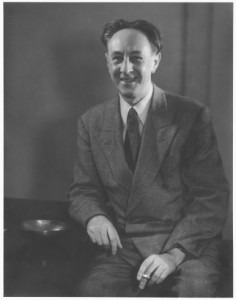 Bohuslav Martinů composed a large quantity of music in various styles and forms, but according to the composer “in pure chamber music I am always more myself.” His first Piano Trio, nicknamed “Cinq pièces brèves” spontaneously emerged in Paris in 1930. “I don’t know how I came to compose the Trio,” Martinů remarked, “suddenly, as if it were the work of another hand, I wrote something entirely new.” In fact, this work would come to define Martinů’s characteristic musical style. Small musical cells built over insistent rhythms ignore regular bar lines, and jazz harmonies mingle within an intricate network of counterpoint. A sculptor, hearing this Piano Trio for the first time remarked that it was “carved out of marble,” a description Martinů found “highly appropriate.”

Bohuslav Martinů: Piano Trio No. 1, H. 193, “Cinq pièces brèves”
By early 1944, Martinů experienced a rare case of writers block. Forced to immigrate to the United States in 1941, financially struggling to stay afloat and constant worry about the fate of his homeland, brought his creative life almost to a standstill. During a summer retreat in Connecticut from 2 May to 14 June 1944, however, Martinů spontaneously drafted a symphony to give voice to his anxieties and his grief. He decided to base the entire symphony on the four-note motive of Antonín Dvorák’s Requiem. Restlessly shifting rhythms combine with melancholy folk tunes over dark grumbles in the piano. The first two movements present an agitated sense of foreboding, while the finale is determinedly fighting these dark forces with considerable energy. This dreamlike and dejected vision of peace and longing for his homeland powerfully contrasts with the imperfections of the real world.

Bohuslav Martinů: Symphony No. 3, H. 299
Bohuslav Martinů wrote a total of five concertos for piano and orchestra. These works span his creative life and capture all of his stylistic modes. Probably his most successful and most appealing work in this genre is the second concerto, written in 1934. Featuring a unique lyricism that dramatically combines song and dance idioms, Martinů suggested that this work is an “expression of the never-ending search for truth and the meaning of life, as well as an homage to music.” As pianist and orchestra communicate in a chamber-like fashion, it is hardly surprising therefore to come across passages reminiscent of Prokofiev, Copland, Stravinsky, and even Brahms. Martinů’s propulsive rhythm is ever-present, but this work relies primarily on a logical thematic progression. Musical passages and sections are seamlessly transformed to effortlessly flow into related and derived segments.

Bohuslav Martinů: Piano Concerto No. 2, H. 237
The oratorio The Epic of Gilgamesh was written and completed in 1955. The work is dedicated to Maja Sacher, wife of Paul Sacher, to whom Martinů had been indebted as a patron. According to Martinů, “Despite our enormous progress due to technology and industrialization I thought that the questions and feelings which preoccupy people are still the same. We find these topics in the literature of ancient peoples, which has survived as well as in our own. They revolve around friendship, love and death. The Gilgamesh-Epos expresses intensely and with almost painful anxiety the wish to find answers to these questions, answers we have still not found. It is dramatic, it pursues me in my dreams.” Scored with considerable delicacy and subtlety, Martinů’s music manages to evoke the past in an eclectic use of modes and telling contrasts between the sung and spoken word. Composed a mere 4 years before his death, it is generally considered Martinů’s greatest and most intimate work.

Bohuslav Martinů: The Epic of Gilgamesh