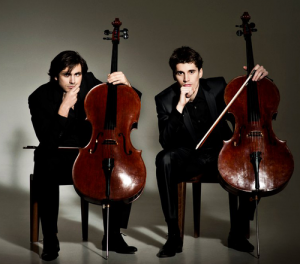 Two cellists, coming from neighboring Balkan countries, studying in England but at different conservatories, are starting to make us look at cellists and the highly versatile instruments they play in a very new way. No longer just the lower support of a string quartet or grudgingly being given a driving line or two, cellos can now take their place front and center on a concert stage.

The kicker, of course, is that this isn’t the concert stage as we might know it. That would be the center of a rock concert stage in a large hall, with amplification.

The cello duo 2Cellos consists of Luka Šulić, who came to the concert world from study at the Academy of Music in Zagreb, then to Vienna, before finishing at the Royal Academy of Music in London, and Stjepan Hauser, who studied first at Trinity College in London and completed his studies at the Royal Northern College of Music in Manchester. Šulić, from Slovenia and Hauser, from Croatia, formed 2Cellos and immediately hit the YouTube charts with their stripped down version of Michael Jackson’s 1987 ‘Smooth Criminal.’ The two cellos face off in a white room filled with red plush chairs and they form the small spot of chaos in the middle. We don’t need the menacing police presence in Michael Jackson’s video to get the same tension here.

Racking up, as of the beginning of November 2015, a mere 15 million viewings, the video has lead viewers into a whole new concept of what a hitherto classical instrument might do.

Other covers they perform include Guns ‘n’ Roses’ “Welcome to the Jungle,” Nirvana’s “Smells Like Teen Spirit,” U2’s “With you or Without You,” and then they began branching out into including other performers in their work: doing AC/DC’s “Highway to Hell” with seminal rock guitarist Steve Vai in a wonderful video where the 2 cellists highjack his signing session and get him to add his lines to theirs.

The use of electric cellos, in this case, makes the point even better. Their version of Paul McCartney and Wing’s theme for the James Bond film Live and Let Die, performed as a trio with Lang Lang, gives you two things: the way you’ve always wanted to hear that piano part and the way you’ve always wanted to hear the cello lines. They try to close the keyboard lid on his fingers as he plays and he’s equally successful in pushing them off the piano bench during their solos.

And then how about a bit of Vivaldi. Vivaldi wrote for many different combinations of instruments, but rarely any concertos for 2 cellos. In making their own version, the 2 cellos take over the 2 violin lines and then make it all very intense. Start with a classic: the concerto played by Isaac Stern and Pinchas Zuckerman:

Thoroughly understanding their position between the training they received at their various academies of music and their other audience in the pop world, they made their own comment on it in their video of AC/DC’s “Thunderstruck.” The audience files into a classical hall, dressed in old Baroque garb of white wigs and knee pants, or long dresses with fans for emphasis. It all starts well with entrance music from the Four Seasons blending into a pseudo-Vivaldi and then it all changes. When “Thunderstruck” rolls in, the temp is pushed, the playing gets violent, bow hairs fail under pressure, and Vivaldi is left far behind. As so is the audience, which as final appearance appears to be equally thunderstruck.

48 million views later, I think they’ve made their point.

One more video has them entering Rock School, where their first appearance brings jeers until they launch into the William Tell Overture…..and bring cheers when they swing into “The Trooper” by Iron Maiden. The audience picks up the change immediately.

Great to watch, but they really eat up bow hairs!