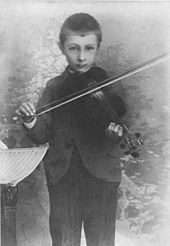 At the tender age of 5, Bohuslav Martinů gave his first public performance as a solo violinist in his hometown of Polička. The townspeople immediately recognized his exceptional talent and eventually raised enough money to fund his musical education. Martinů studied at the Prague conservatory for a number of years, but was dismissed for “incorrigible negligence.” The composition bug, it seemed, had bitten Martinů! Given his violin background it is not surprising to find a Concerto for Violin and Piano among his early large-scale pieces. Dating from 1910, Martinů had apparently conceived the work as a vehicle for his own performances. Given the “Concerto” title, he seemed to have envisioned a composition with orchestral accompaniment. However, no such version is known to exist.

Bohuslav Martinů: Concerto for Violin and Piano, H. 13
Martinů developed rapidly as a composer, and his compositional pallet soon included elements of impressionism and jazz. Unable to make his mark in conservative Prague, Martinů packed his bags and headed for Paris. Soon, ballets became his favorite medium for experimentation and the one-act La revue de cuisine, with the alternate title “The Temptation of the Saintly Pot” was written in 1927. Martinů considered this work one of his most successful compositions. He wrote, “the impeccable ordering of the movements in the score, whereas in fact at that time I had no particular technique. But it is a work where the composer’s character creates its own technique. Pairing jazz influences with a surrealist scenario—the marriage between Pot and Lid is jeopardized by Cream-beater and Dishcloth—La revue de cuisine is one of Martinů’s most successful works.

Bohuslav Martinů: La revue de cuisine, H. 161
By the mid 1930’s, the Czech artistic community in Paris became acutely aware of the worsening political situation in Europe. And this increased political tension was quickly reflected in Martinů’s music. The Double Concerto, written in 1938 but not performed until 1940, gives voice to an intensity of expression rarely heard in his other works. A fiercely dynamic opening is inundated with forceful energy and shrieks of war. And the contrasting anguished lyrical section is brutally disturbed by a menacing angularity of the rhythm. Martinů’s premonitions did come true in the end. With the German army approaching Paris during the early days of the Second World War, Martinů had to flee the city as he had been blacklisted for his connections to the Czech resistance.

Bohuslav Martinů: Double Concerto for Piano and Timpani, H. 271
By 1941, Martinů left France for Spain and Portugal, and eventually reached the United States in 1941. However, he would return to France in 1955 and receive an appointment as composer-in-residence at the American Academy in Rome. Despite his double exile, Martinů maintained his optimistic musical spirit in his Sonatina for Clarinet and Piano. Combining the neoclassical influences of Francis Poulenc and Igor Stravinsky with the rich tone colors of Claude Debussy and the melodic gift of Antonín Dvořák, Martinů crafted a staple of the clarinet repertoire. Although cast in three distinct movements, the composition nevertheless unfolds in a suite-like structure. Unexpected syncopations and complex cross rhythms alternate with lyrical passages that nostalgically remember happier and more productive times.