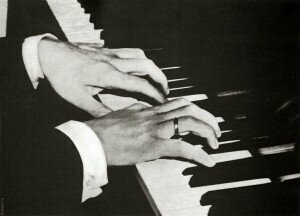 For years I told myself I couldn’t play Liszt – or Rachmaninoff for that matter – because of the relatively small size of my hands.

I can stretch a ninth, just about. Any more and it’s painful – and a hand injury some years ago, sustained while playing rapid octaves in Schubert and which kept me off the piano for three months, has made me especially careful about large stretches. In contrast, both Liszt and Rachmaninoff could apparently reach 12 note spans. They unquestionably wrote piano music which suited the size and facility of their hands – it is said that Liszt’s hands had very low-lying connective tissues between the fingers, hence his ability to span the larger intervals, and he also had unusually long fourth fingers on both hands.


Many pianists believe that fingers can be strengthened and hands “stretched” by doing exercises such as those devised by Hanon. While these may increase finger dexterity and velocity, any exercises which are intended to increase or stretch the hand span are potentially highly injurious to the pianist, and teachers who are well versed in hand health, physiology and natural flexibility would not recommend them. (Recall Schumann and the apparatus he devised to stretch his hands, with unfortunate results.)

Plenty of world-class pianists have small hands, including Alicia de Larroccha and Vladimir Ashkenazy, and yet they seem to be able to cope with the most physically demanding works in the repertoire. Physical attributes should never deter someone from learning the piano, as concert pianist Nicholas McCarthy, who was born without his right hand, will testify.

So how does the pianist with smaller hands manage works by Liszt or Rachmaninoff? Fortunately, one does not need to use arcane and dangerous finger-stretching devices: technique and specific workarounds, retaining relaxed hands and utilizing fluid movements enable those of us with smaller hands to navigate this repertoire.

“It’s important that pianists with small hands learn to avoid tension, to minimise stretch when it’s not needed, and work around awkward movements – perhaps revoicing a chord on occasions. A bit of cheating once in a while is necessary! Pianists with small hands often become more aware and knowledgeable about technique because they’ve had to work harder at it.”
Penelope Roskell, pianist and Professor of Piano and Piano Pedagogy at Trinity-Laban Conservatoire of Music and Dance

Chords can be revoiced (i.e. the weight of each note in a chord adjusted according to the size of the pianist’s hand) or very large chords can be arpeggiated (spread to create the illusion that you have played what you cannot play!), or notes can simply be omitted (given the richer textures in the writing of Liszt and Rachmaninoff, the missing out the odd note in, say, the middle of a chord, is not going to be that noticeable in performance!). When landing on a chord, ensure there is an immediate release of tension/effort in fingers, hands and arms as soon as the fingers sense the keybed.

Other techniques, such as lateral arm movement, where the forearm drives the hand in an eliptical “polishing” motion, provide a bigger hand stretch with almost no additional effort, while also keeping the hand, wrist and forearm aligned. This remarkably simple and useful piece of technique can be practised with the first Prelude of Bach’s WTC.

Sharing notes between the hands is also helpful, as is allowing the upper body to follow the movements of the hands and arms up and down the keyboard – rather like a tree with a firmly-rooted trunk whose branches sway easily in the wind – instead of remaining rigid on the piano stool.

Above all, avoid tension in the upper body, arms, wrists and hands. Pre-performance exercises such as allowing the arms to float upwards, as if on a cushion of air, and then float down again, as if on a parachute, create lightness and fluidity, essential for tension-free and expressive playing.