Charles Gounod took the first prelude of Bach’s Well-Tempered Klavier and started noodling around on it, and his piano teacher, Pierre Zimmerman, with whom he was studying at the Paris Conservatoire, took note of it.


Zimmerman took note of it, notated it, and took it to a publisher. Gounod’s noodling appeared in April 1853, arranged for piano, violin or cello, and harmonium. The part for the violin or the cello forms a counter melody above the Bach-inspired bass.

Two months after the first piece appeared, a version for solo piano was issued in June 1853. 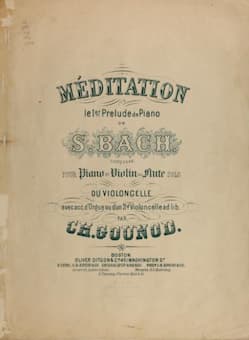 The Méditation was later arranged as a song, setting a text by the French poet Alphonse Lamartine, ‘Vers sur un album.’ The text is about the book of life and no matter how we want to turn back the pages, the page where we die is already under our fingers. This setting was for violin, piano, and small chorus.

Another version for chorus, violin, and orchestra was published in Paris in 1858 with a Latin text, the Antiphon for Trinity Sunday, ‘Benedictio et claritas et sapientia.’

And then, in 1859, an inspired text was added to the Gounod’s counter melody, that of the prayer to Mary, ‘Ave Maria.’ 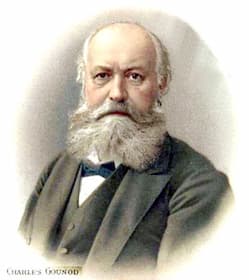 The work remains one of Gounod’s most famous compositions, and in his over-writing of Bach, the descant melody has almost become its own work, with the Bach Prelude No. 1 supporting it from below, but almost forgotten at the same time.