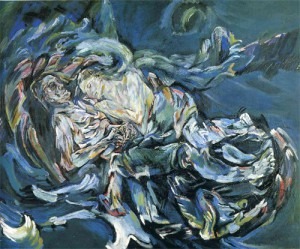 When Gustav Mahler died in 1911, his widow Alma first sought comfort in the arms of her already-lover Walter Gropius. However, Alma still harbored resentment that Gropius had intentionally misaddressed an envelope and thus exposed their affair to Gustav. In doubt about their future, Alma engaged in a brief but passionate affair with the Viennese biologist Paul Kammerer. Kammerer, in the event, turned out to be a rather possessive not to mention downright morbid chap, so she turned her attention to the young and highly eccentric painter Oskar Kokoschka. Kokoschka was a key figure in the development of the Expressionist school of painting and simultaneously an accomplished dramatist. But he was also volatile, angry, aggressive and violent, and the local press called him “the wildest beast of all.” His paintings frequently prompted the analogy of X-ray films and he had the uncanny ability to turn any party or gathering into a massacre!

They first met in 1912, when Kokoschka spontaneously produced a drawing of Alma while she was playing the piano. “Suddenly,” Alma reports, “he pulled me into his arms. For me it was a strange, almost shocking and violent hug.” Hours later he asked her to become his wife, an offer she politely declined. Nevertheless, their unbridled passion over the next 3 years was only interrupted when Alma posed as a model for his paintings. Kokoschka was working on a double portrait in which Alma wears a red nightie. Alma later recalled, “I was once given a flame-red night gown. I didn’t like it due to its overpowering color. Oskar took it from me right away and from then on went around his studio wearing nothing else. He wore it to receive his astounded visitors and was to be found more in front of the mirror than in front of his easel.” Once the painting was finished, it was featured at the 26th Exhibition of the Berlin Secession in the spring of 1913. Walter Gropius was one of the organizers of the event, and we might well imagine his surprise at seeing his lover publically holding hands with Kokoschka! Gropius had always suspected that Alma was keeping secrets about her relationship with Kokoschka, but being confronted by the truth in such a public way affected him deeply.

But things had gotten somewhat edgy in Vienna as well. Kokoschka was plagued by obsessive jealousy. He waited until 4 in the morning outside her apartment to make sure that no boys emerged in the dead of night. Alma had reverently arranged a number of her photographs around a bust of Gustav Mahler’s head, and Kokoschka would passionately kiss the photographs to spite Gustav. Even Kokoschka’s mother got involved, writing to Alma, “If you see Oskar again, I’ll shoot you dead!” They still were unable to control their passion, however, and Alma reports, “On a stormy tormented day when he passionately, but entirely selfishly loved me, the world melted away suddenly, and I have since been convinced of an outer-worldly existence.” After emotionally tumultuous trips to the Swiss Alps and Naples, Kokoschka fashioned his most famous painting of their relationship. Die “Windsbraut” (The Tempest) shows the lovers side by side sheltering from a ferocious storm. Alma looks peaceful and content, but Kokoschka’s face shows signs of worry. Maybe he realized that his relationship with Alma was coming to an end. 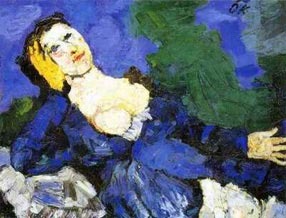 Things got even more complicated when Alma became pregnant with his child. Her decision to abort caused an irrevocable rift, one from which Kokoschka was never able to fully recover. Terminally depressed, he volunteered for the front lines in WW I and was seriously wounded in Russia in 1915. Meanwhile, Gropius was recovering in a Berlin hospital from wounds sustained in the war. Alma rushed to his side and “the days we spent with tearful questions, the nights of tearful answers. He could not get away from my relationship with Kokoschka.” Somehow, Gropius managed to leave Kokoschka behind, and he married Alma in 1915. The news of Alma’s marriage to Gropius devastated Kokoschka. In deepest desperation, he ordered a life-size doll from the Munich doll-maker Hermine Moos. The doll was to resemble Alma in every little detail, including “the incipient hollows and wrinkles that are important to me. Please make it possible that my sense of touch will be able to take pleasure in those parts where the layers of fat and muscle suddenly give way to a sinuous covering of skin.” The final product, rather predictably, proofed to be a disappointment as it could scarcely fulfill Kokoschka’s erotic and sexual desires. Kokoschka writes, “After I had drawn it and painted it over and over again, I decided to do away with it. It had managed to cure me completely of my passion. So I gave a big champagne party with chamber music, during which my maid Hulda exhibited the doll in all its beautiful clothes for the last time. When dawn broke—I was quite drunk, as was everyone else—I beheaded it out in the garden and broke a bottle of red wine over its head.” His expressionist drama Orpheus and Eurydice of 1918 also reflects his failure of his love for Alma. It was set to music by Alma’s son-in-law Ernst Krenek as an opera in three acts, Op. 21. Kokoschka was Orpheus, Alma was Eurydice, and Anna Mahler was Psyche. And wouldn’t you know it, Gustav Mahler appeared as Pluto, god of the Underworld!