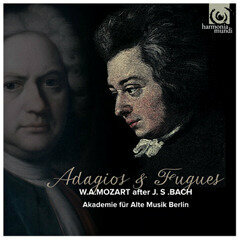 It has too often been overlooked that, between Bach’s death (1750) and the triumphant revival of his St Matthew Passion by Mendelssohn in 1829, other composers had already investigated the œuvre of this ‘old master’. Mozart was the most fervent among them; thanks to the discoveries of Baron van Swieten, he had the opportunity to explore The Well-Tempered Clavier and make the string arrangements from it featured on this disc.