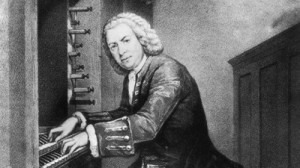 Throughout his long and industrious musical career, Johann Sebastian Bach (1685-1750) never strayed far away from home. Content to live and work in his native community, and possibly remembering that he was once thrown in jail for overstaying his leave of absence, he never ventured beyond North-German borders. This self-imposed isolation meant that Bach had to patiently wait until a particular repertory or musical style, originating in different European regions, became available at his place of work. In 1712, a wide range of Italian repertory, including the music of Antonio Vivaldi, became extremely popular at the Weimar court. And Bach quickly forged a powerful personal musical style by coupling Italian mannerisms with complex counterpoint. On the other hand, there are no direct indications that musical repertory from the British Isles ever reached Bach during his tenure at Weimar, a period that supposedly saw the composition of the English Suites. So where did the title come from, and what does it actually mean?

During his lifetime, Johann Sebastian Bach was primarily known as a performer rather than as a composer. Few of his compositions appeared in print, and most important works were published long after his death. A large number of his autograph manuscripts were lost or destroyed, although Carl Philipp Emanuel Bach managed to salvage a good number of important sources. A large number of these important sources are manuscript copies made by Johann Sebastian Bach’s students. In many instances, performers made copies of such copies and used them for public or private occasions. For the English Suites, the autograph manuscript has not survived, and the work has come down to us in a number of manuscript copies only. On one of these early manuscript copies, written by Bach’s youngest son Johann Christian, we find the mysterious annotation “fait pour les Anglois” (written for the English) for the prelude of the first suite, BWV 860/1. Despite vigorous musicological attempts to properly contextualize this annotation, the precise meaning remains unclear. However, it certainly gave the early Bach biographer Johann Nicolaus Forkel food for thought. Basing his reasoning on the mysterious annotation, Forkel suggested “They are known by the name of English Suites because the composer made them for an Englishman of rank.” Sufficed to say, no such English nobleman has ever been identified.

Musicological archeologists discovered a quotation in the Prelude to the first English Suite based on a theme by Charles Dieupart, a French musician active in London. This led to speculations that Bach was inspired to compose the English Suites via his study of the Dieupart suites, and that “the use of Preludes in these suites represents a distinctively English form.” As always, proper identification based on musical quotations, stylistic traits and national characteristics remains haphazard with Bach, as the surface characteristics of the English Suites strongly resemble those of Bach’s French Suites and Partitas. A more suitable avenue of inquiry might reasonably look for a tangible connection between Johann Sebastian Bach and England, and these points of contact are really not very hard to find. Two of Bach’s descendants—both of them eminent composers—lived in England after his death. His son John Christian Bach (1735-1782) made his home in London from 1762, where he served as the music master to Queen Charlotte. J. S. Bach’s grandson Wilhelm Friedrich Ernst Bach (1759-1845) also made his living in London between 1778 and 1782. Through their influence—and let’s not forget that the inscription “fait pour les Anglois” was penned by John Christian after his father’s death and prior to his departure for England—interest in J. S. Bach appears to have been greater in England than in any other country outside Germany. The Bach scholar Alfred Dürr proudly declared “England can lay undisputed claim to the glory of being the first country aside from Germany to have recognized the significance of Johann Sebastian Bach and to have disseminated his works long before the famous Berlin revival of the St. Matthew Passion in 1829.” Repeated claims that “the English Suites are distinguished from the fanciful and beautiful French Suites by their strong, grave, and masculine character” are debatable. One thing is certain, however, Johann Sebastian Bach never called these works English Suites. As it happens with some regularity in the jumbled and confused records of human history, it may all simply be a matter of reception history.