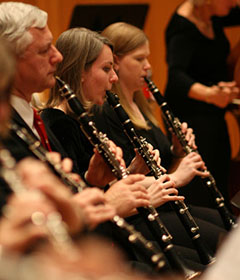 My work in Britten Sinfonia frequently involves playing second clarinet parts, yet elsewhere (like many wind players) I move between second and principal positions. I get asked if I enjoy one more than the other, and the honest truth is that they’re just different. Each role requires a different skill set, and while some gravitate towards one or the other, there’s certainly a lot to be learned wherever you end up sitting in the orchestra.

Of course, I can’t speak for every instrument, as each section of the orchestra has its own intricacies; however, there are a few things that translate across at least the different instruments in the wind section.

Perhaps the obvious difference you encounter is that of solos: as a principal player you get the solos the vast majority of the time. In more traditional classical repertoire, it’s very rare to hear the second clarinet playing by itself without the first alongside – I’ve seen it happen several times where a second player genuinely does have an isolated passage to play, and after the end, I see them turn to their principal asking if they’d made a mistake!

In more modern music, the first and second parts can be more independent of each other, but it’s down to the second player to gauge how much to ‘play out’ or to sit back. As a second player, the main job is to support the principal and blend in with the section, and as a result your ears always have to be wide open to the different roles you have to play: are we playing in octaves (do I need to support the bottom octave more for a nice balance)? Are we playing in unison (am I blending well with the principal and supporting the sound while not overpowering)? Are our parts independent (how am I balanced with the rest of the section and the whole orchestra)? These rules are a great starting point for pretty much any orchestral repertoire, with anything from Beethoven to Debussy necessitating this kind of reactive listening.

However, second players don’t always have to toe the line and be in the background. In Bartók’s wonderful Concerto for Orchestra, we have a nice example of how the roles of the second (and, in this case, third (it’s a big orchestra!)) clarinet have moments of independence. In the third movement, Bartók constructs wonderful textures out of canons of short material, where voices enter with the same pattern one after the other, giving a weird unsettling effect. We can see in the first example that the flutes and clarinets have exactly the same material in various octaves, so the voices should sound more ‘equal’: a moment where as a second player I would think to ‘play out’ and think more like a soloist, albeit still in-keeping with the general atmosphere of the piece.

Later on in the same movement, the clarinets have this wonderful gurgling texture, which Bartók writes in a very democratic way. To give us time to breathe (and to stop our fingers from getting in too much of a twist), Bartók divides the two lines between three instruments, alternating our entries so that at one point the principal is actually playing under the third clarinet part. While normally this might raise some eyebrows, here it’s a purely practical decision, to enable Bartók’s creepy texture to keep bubbling away without our breaths getting in the way. 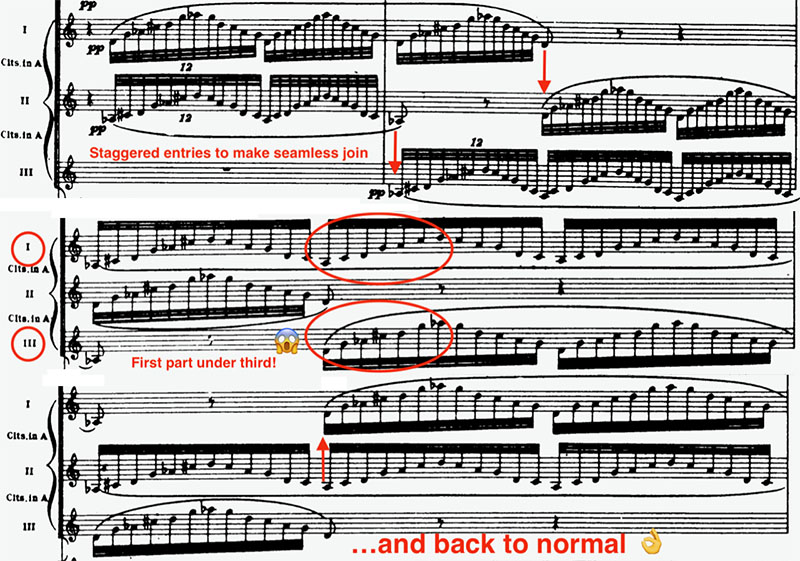 All these kinds of changes are being anticipated and reacted to in fractions of a second. Whenever you hear an orchestra play live, this is what is going on between every single player on stage – a silent communication, implicit understanding, lightning reactions to the minutest changes of detail. Very rarely do musicians write in this kind of thing – in this example from Bartók, all the players will be listening and aiming to create one unbroken sound. Ideally, the audience would have no idea that this two-part texture is actually being created by three players. Listen to this particular passage (begins at around 23:07) from the video above!

So, there you have it: a tiny glimpse into the world of the second clarinet. Playing a second part doesn’t always have to be as sad as the Alto’s Lament seems to make out. Sure, you don’t get all the solos, but just as much skill is required to only be noticed at just the right moment.