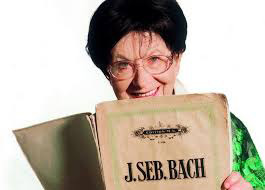 Zuzana Růžičková (1927-2017) experienced personal tragedy and suffering on an unimaginable scale! She was a happy but sickly child suffering from tuberculosis, who “was in love with music from the beginning.” She asked her parents to buy her a piano and to find her a teacher, and after much debate Zuzana got her way. In fact, she musically progressed at such a rapid pace that her teacher suggested further study with the top French harpsichordists in Paris. However, the Nazi invasion of Czechoslovakia not only prevented her studying in France, a couple years later her family was deported to the Terezin (Theresienstadt) labor camp. Her grandparents and her father died in the camp, along with thousands of other Jewish inmates. “My childhood ended there,” she says, “but music helped me to survive.” As she was pushed onto a truck bound for Auschwitz, she wrote a small section of the Bach English Suite No. 5 on a scrap of paper, as “I wanted to have a piece of Bach with me as a sort of talisman because I didn’t know what was awaiting us.”

With the camp number 72389 tattooed on her arm Zuzana found out that she was supposed to be gassed on 6 June 1944. She remembers, “Seeing the gas chambers, the smoke every day. I’ll never forgive myself that I always went in the evening to my mother and I wept and I said, ‘I want to live, I don’t want to die’.” Zuzana was saved by the D-Day landings, which took place in the morning of her execution day. She was transferred to the death camp at Bergen-Belsen in 1945, contracted bubonic plague, and miraculously survived. Having endured three death camps during World War II, Zuzana just “couldn’t live without music. It is not enough to be an extraordinary musician; you have to be crazy. You have to have the feeling that you cannot live without music.” Zuzana’s suffering, however, was not over. The Communists took control over Czechoslovakia in 1948 and forced the country into 40 years of totalitarian rule. Zuzana remembers, “I couldn’t really believe that there was another regime like the Nazis, so cruel, so stupid, so anti-Semitic. At first I was so naive. I thought this couldn’t be true.” For Zuzana, music once more provided the ultimate calm in a cruel and militaristic world. 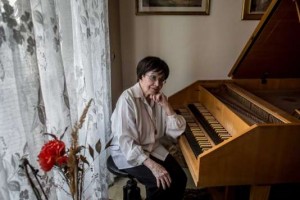 Against all odds, and despite continuous harassment and surveillance by Czech authorities, Zuzana enrolled in the Academy of the Performing Arts in Prague. She gave her first harpsichord recital in 1951, and made her international breakthrough at the ARD International Music Competition in Munich, in 1956. Although she was allowed to further her studies in Paris and performed at various Bach Festivals in numerous European cities, she remained under suspicion from the Communist government. She was not allowed to travel with her husband, was not allowed to teach music to Czech students and her foreign currency earning were confiscated by the government. Although she recorded music by modern composers, including Bohuslav Martinů, Francis Poulenc, Manuel de Falla and Frank Martin, the music of J.S. Bach remained central to her art. And when the French label Erato contracted her to record the complete keyboard works of Bach, Zuzana became the first person to complete that task in 1975. “Bach played a big role in my recovering from my terrible experiences,” she writes. “Bach is very soothing, and you always feel in his music that God is present somehow.” Health issues forced Zuzana to say goodbye to the stage in 2006, and she considers “to have lived until the age of 90,” her greatest achievement.