In Tune Arts
An Artist at the Opera: Marc Chagall
by Maureen Buja October 30th, 2016 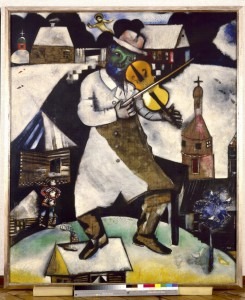 When we think of Marc Chagall and opera, we think first of the wonderful murals he created for the Metropolitan Opera in New York and the Paris Opera. Born in Russia in 1887, Chagall was largely self-taught due to the restrictions on Jewish education at the end of the 19th century and his own family’s non-artistic background. At 19, he moved to St. Petersburg and with the help of false papers attended art school. He was a student of Léon Bakst and followed him to Paris in 1910. Bakst made his name designing stage sets and costumes for the Ballets Russes of Diaghilev and, in due time, Chagall also found some jobs in stage design, first for the new State Jewish Chamber Theatre in Moscow. 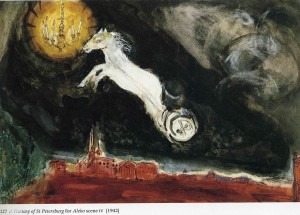 He returned to Russia from France and found some jobs in stage design, first for the new State Jewish Chamber Theatre in Moscow. With the start of WWI, Chagall had to remain in Russia until the war ended. After the war, he returned to France and was caught there during WWII when the Germans overran the country. His fame as a painter brought him onto the list of prominent artists who were at risk of death during the German occupation. He was one of over 2,000 artists rescued by the American Vice-Consul in Marseilles, Hiram Bingham IV, who granted him a forged visa to the US. 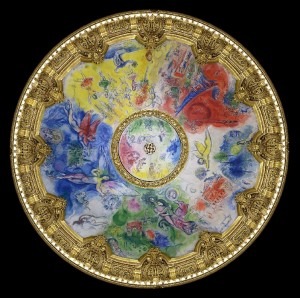 Chagall’s style was unique and quirky, with figures floating through the sky, a gigantic fiddler dancing on tiny houses, farm animals, and, in honour of his father’s work in the herring business, many fish. One of his fiddler paintings seems to have been the inspiration for the Broadway music, Fiddler on the Roof, although there’s no agreement on which of his many fiddler painting it might be. 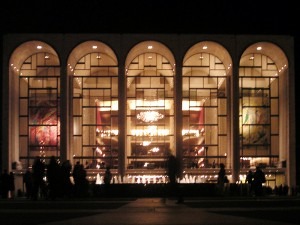 Façade of the Metropolitan Opera House

In the US, his art wasn’t critically liked, being seen as too folkloristic. His first work for the US stage was in 1942 for a production of Leonid Massine’s Aleko for the New York Ballet Theatre. He designed both the scenery and the costumes and his work brought other muralists, including Diego Rivera, to the show. 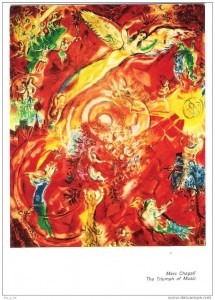 The Triumph of Music

This wasn’t his first work for the house: in 1958, he designed the sets and costumes for a production of Maurice Ravel’s ballet Daphnis et Chloé at the Paris Opera, and it was during a performance of that same production in 1964 that his new ceiling was shown for the first time. 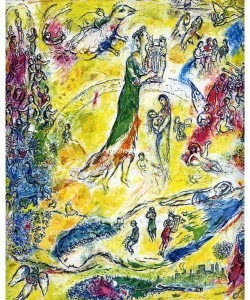 The Source of Music

In 1966, for the Metropolitan Opera in New York, Chagall created two enormous murals (30 ft (9.1 m) by 36 ft (11 m)) designed to fit within the arched shape of the building’s front. The south (left) mural is The Triumph of Music and the north (right) mural is The Sources of Music. 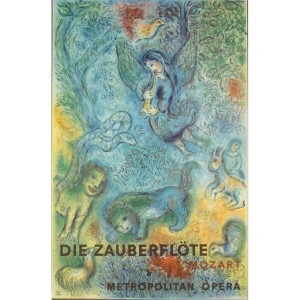 Programme book for Die Zauberflöte at the Met

His sets and costumes for the new Metropolitan Opera production of Mozart’s Die Zauberflöte in 1967 were not uncontroversial. Before the premiere, rumour had it that the designs were too fanciful, too ‘way-out’ and too colourful. For some critics, however, these elements were what made his designs perfect for Mozart’s imaginary world. 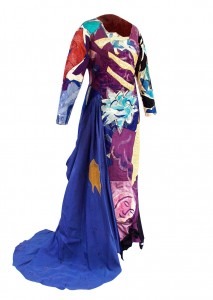 One critic was annoyed that the stage sets got more applause than the singing, complaining: “By the end of last evening, many members of the Metropolitan Opera House’s audience were convinced that Marc Chagall had not only designed the new production of The Magic Flute, but had also composed the music, written the libretto, sung the major roles, and conducted…” 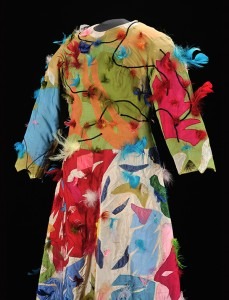 When we look at the costumes, however, it was, as one writer noted, like being clothed in a Chagall painting itself.

Despite the controversy before the opera’s opening, Chagall’s designs were used until the 1981-82 season.

Chagall, in his Paris Opèra ceiling, showed a familiarity with a great variety of opera and ballet works. It is said, though, that Mozart was his ideal and Die Zauberflöte was Mozart’s perfect opera.