In Tune Arts
An Artist at the Opera: Ivan Bilibin
by Maureen Buja October 2nd, 2016 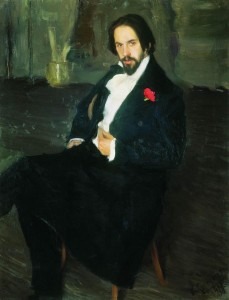 The Russian illustrator Ivan Yakovlevich Bilibin took his love for Russian folklore into his designs for the stage, creating clear, finely edged sets. 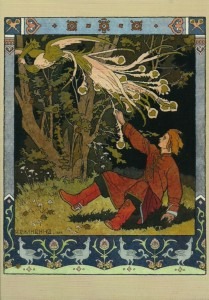 We can also find the Firebird (see Stravinsky) and Baba Yaga (see Mussorgsky) among his other drawings.

Mussorgsky: Pictures at an Exhibition: IX. The Hut on Fowl’s Legs (Baba-Yaga) (orch. L. Funtek and S. Gorchakov) (Toronto Symphony Orchestra; Jukka-Pekka Saraste, cond.)
In opera, he designed the sets for a 1908 production of Mussorgsky’s Boris Godunov for the Grand-Opera in Paris, produced by Serge Diaghilev, and this brought him to the world’s notice. 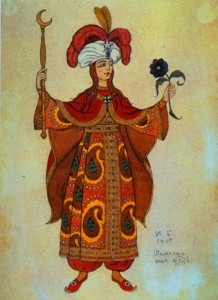 The Shemakha Queen. Costume design for Rimsky-Korsakov’s The Golden Cockerel, 1909. 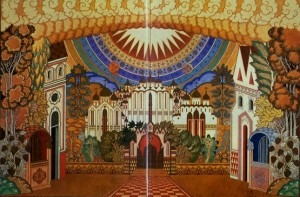 Kitezh Transformed. Stage-set design for Scene Two, Act Four of Rimsky-Korsakov’s The Tale of the Invisible City of Kitezh and the Maiden Fevronia, 1929.

Other Rimsky-Korsakov operas he designed included The Tale of the Invisible City of Kitezh, The Tsar’s Bride, The Tale of Tsar Saltan, and Borodin’s Prince Igor. 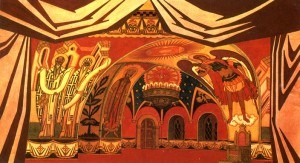 The Chambers In The Tsar’s Tower. Stage-set design for Act Four of Rimsky-Korsakov’s The Tale of Tsar Saltan, 1930 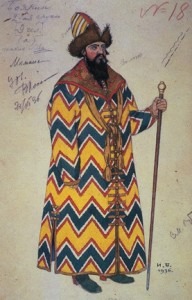 The Boyar. Costume design for Rimsky-Korsakov’s The Tale of Tsar Saltan, 1936.

Borodin: Prince Igor: Act II: Dance of the Polovtsian Maidens (Sofia National Opera Orchestra; Jerzy Semkow, Cond.)
We can see in these stage designs the same kind of detailed imagery that appeared in his illustrations. He not only developed his own Russian folkloric style but also brought Japanese imagery into his art. As we know from other artists, the effect of the Japonism movements in Europe affected art (Van Gogh), music (Debussy), and other designs in general. In taking it into Russia, Bilibin enriched the language of art. Bilibin perished in 1942 during the Siege of Leningrad.