In Tune Arts
An Artist at the Opera: David Roberts
by Maureen Buja August 13th, 2016 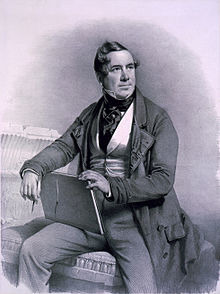 It’s often said of artists that they need a solid job they can go back to once that artist thing doesn’t work out. For painter and scenic designer David Roberts (1796-1864), that solid job he could go back to was, in fact, painting, but house-painting, not fine art painting.

From the age of 10, Roberts was apprenticed to a house painter and decorator, and throughout the beginning of his long career, as various positions closed, went out of business, etc., he would return to house painting.

His first work in theatre design started in 1816 when he was painter and designer for a circus, accompanying them on their summer tours. When he had caught up on his duties, he was sometimes required to take the stage in the clown’ skits. In 1817 he was at the Pantheon Theatre in Edinburgh, until it failed in May 1817, whereupon he returned to house painting. The Pantheon reopened in 1818 but he couldn’t join them until the winter season because of his house-painting commitments. After a stint at the Theatre Royal in Edinburgh in 1821, he moved to London in 1822 to work first with the Coburg Theatre (now the Old Vic) and then the Theatre Royal, Drury Lane. 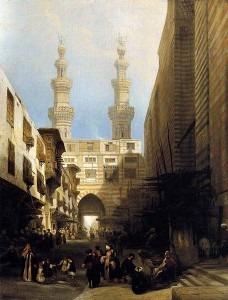 He also started a career as an oil painter and landscape artists and started to place paintings in exhibitions in Edinburgh and London.

He did work for the Royal Opera House at Covent Garden in 1827, including the sets for the London première of Mozart’s Die Entführung aus dem Serail, put on by the Charles Kemble Opera Company. He also did scenery for a pantomime depicting the naval victory of Navarino (which had been fought in October 1827 in Greece), and two panoramas that he executed jointly with William Clarkson Stanfield, who had worked with him at the Theatre Royal in London.

His fine art work took him outside England and soon his paintings depicted scenes from France, the Low Countries, Spain, and Morocco. The artist J.M.W. Turner finally persuaded him to abandon his theatre work and to devote himself full-time to his art. In 1838, Roberts set sail for Egypt – his goal was to amass a significant portfolio of images that he could then sell to the public. Egypt was much in vogue and collectors wanted anything they could get – from drawings and watercolours to full paintings.

In many ways, his images of the Middle East, published as lithographs in his books Sketches in the Holy Land and Syria, 1842–1849 and in his Egypt & Nubia series, became the pictures many people held as their imagined Middle East. In this picture of Cairo, for example, we can admire the fine architecture while also investigating what’s happening on street level. 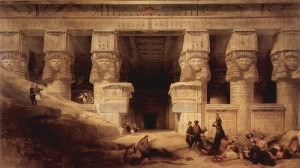 Similarly, in his 1841 painting of the Temple of Dendera, we have the massive column heads looking at us, while in the foreground, two women play musical instruments. This is the romance of the East, where we can imagine ourselves exploring the half-buried temple, with the sound of the oud and drum in our ears.

From apprentice house-painter in 1806 to President of the Society of British Artists in 1831 to being full member of the Royal Academy in 1841 – this was a career that saw each step take him closer to the top of his field.