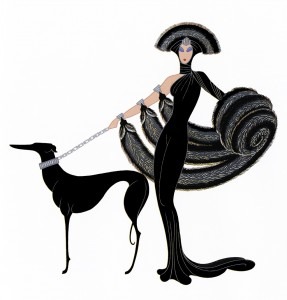 The Russian-born designer Roman de Tirtoff, better known as Erté (from the French pronunciation of his initials R-T), is best known for his art deco fashion designs. He also designed shoes, jewelry, did interior design, and graphic arts.

He also designed for the stage. His work on major shows in the 1920s, including the Ziegfeld Follies of 1923 and George White’s Scandals in New York, and many shows for the Folies Bergère in Paris.

Design for Black Breaches, Cap and Cape for Ganna Walska in Rigoletto (Metropolitan Museum of Art)

He designed stages and costumes for opera from the 1920s to the 1980s, with many of his designs from the 1920s for the singer Ganna Walska. Ganna Walska was an opera singer who personified, for many, the power of money in opera. Her fourth husband (of her six) was the wealthy Chicago businessman Harold McCormick. Walska was, according to reports, a terrible singer, but her husband promoted it lavishly.

It was McCormick’s promotion of Walska’s indifferent career that was the inspiration for Orson Welles’ character of Susan Alexander in Citizen Kane.She appeared in Chicago as part of the Chicago Opera Association company, and in 1922, purchased the Théâtre des Champs-Élysées in Paris with her own money to have her own stage.

Erté designed gowns for Walska in Chicago, including costumes for shows such as Rigoletto in 1922,

Other designs he did for Walska included costumes for the operas La Bohème, Martha and Faust. For a 1920 French production of Tosca, he designed gowns for her, with the costumes being made by the French couturier Lanvin.

Design for the bedroom in Der Rosenkavalier

In 1927, for Pelléas and Mélisande at the Metropolitan Opera in 1927, he designed the costumes for Lucrezia Bori, who sang Mélisande. This was the only designing he did for the Met.

The silver knight of the rose, Octavian, from the cover of the Glyndebourne programme

Other operas for which there are designs include a 1919 Fedora, 1935 La Traviata, and a 1952 Capriccio at the Opéra-Comique in Paris.

His last work was on the 1980 Glyndebourne production of Der Rosenkavalier.