‘Understand their world through your own life experience’ 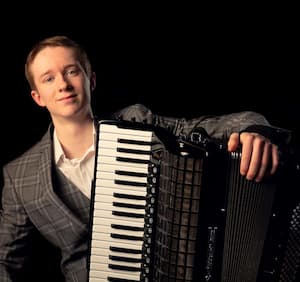 Originally starting self-taught on the instrument, young Scottish accordionist Ryan Corbett has become a rising star. Currently in his final year of study at the Royal Conservatoire of Scotland, it wasn’t until Ryan was 14 that he started receiving lessons from Djordje Gajic, with whom he still studies now.

Despite having what many would describe as a later start on the instrument, Ryan recently won the Keyboard Prize, First Prize, and Gold Medal in the 2021 Royal Over Seas League competition, the first accordionist since 1993 to scoop the Gold Medal, and makes his debut with the National Youth Orchestra of Scotland this summer. Ryan chats to me about his early days of practice, his own arrangements and transcriptions, and challenging audiences’ expectations of what his instrument is capable of.

I got a loan of a small accordion that didn’t really work from a family friend. Originally the air was leaking out of the bellows so it was hardly playable, but I played a bit of piano at the time and I got my brother to pull the left hand side of the accordion with it lying flat on the floor while I played it like a piano.

There was a ‘Scottish afternoon’ at primary school around the same time, where people would sing songs, recite poetry, play Scottish music. I told the teacher I played the accordion even though I didn’t really, so I prepared a tune to play for that. From there I just got more and more into playing Scottish and Irish folk music on the instrument, because at that time that was all I knew was possible. I was getting lessons on piano and violin, but I was at that difficult stage where it can feel like a bit of a chore to practise, or you’re being told to practise, whereas with the accordion […] it didn’t feel like practice – it just felt like enjoying myself, having fun.

Starting having lessons didn’t make it become a chore, I already had that foundation of enjoying playing it. Djordje’s just a fantastic teacher, so it was quite a smooth transition from being self-taught to having lessons. He introduced me to playing classical music on the instrument, a mixture of transcriptions and solo works.

I find Djordje’s playing inspiring, and I’ve enjoyed working with him recently. We played some duets last year – we made this arrangement of Stravinsky’s Petrushka and the Bach Prelude and Fugue in E-flat, the St. Anne. I guess looking at role model performers it’s often pianists. I try not to idolise too much, as tempting as it is. 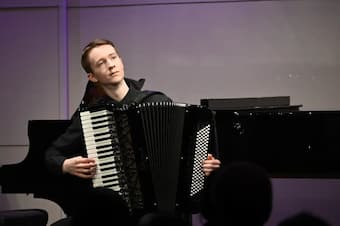 Is there a certain style/composer that you feel a particular affinity with?

I do enjoy everything in a way. I have a particular interest in the baroque keyboard music, particularly Bach and Scarlatti alongside Handel and Rameau. I particularly enjoy those kinds of transcriptions but it’s impossible to say I enjoy playing that more than some original music, it’s just different.

I’ve just made arrangements of the Tchaikovsky Romance Op.5, which is a piano piece, and the Bach A minor Prelude and Fugue BWV 543, so I’m just starting to perform them.

A composer I’ve studied more of [recently] is probably Bach, but I think each time you perform a piece, or each time you revise it or bring it back after a while, you always want to try and make it feel fresh, so you’ll be listening to different things. You don’t want it to be a static entity. It lives and evolves with the different performances that you play. It’s trying to understand their world through your own life experience.

A lot of people, when they think of the accordion, think of a busker on the streets of Paris or just Ceilidh music, but although some people do lament the stereotype of the accordion, I quite like the fact you get to present something new to audiences. I find it a pleasure and a privilege to be able to bring something that people might not have heard before. And although it’s becoming more widespread in the UK now, it’s been slower to develop here than in other countries. So I quite like the fact that it’s still growing here.

Do you find inspiration from things other than music? What do you do away from the accordion?

I’ve always enjoyed cycling and in the past have done more aggressive mountain biking, but recently I’ve had to be more sensible with my hands, so I cycle a bit more flat. I love getting out in nature though, I think it’s important.