the intensity of my current immersion with his music has become one of the most profound experiences of my life.
Jonathan Biss

For American pianist Jonathan Biss, Beethoven has been a near-constant companion for almost his entire life. He has been playing and writing about the 32 Piano Sonatas, has spent nearly ten years recording Beethoven’s sonatas and has embarked on a cycle of concerts performing all the sonatas at London’s Wigmore Hall and in the USA. 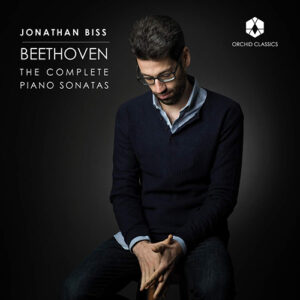 His handsomely-produced boxset of the complete Piano Sonatas (Orchid Classics, March 2020) presents the sonatas not in chronological order, as many sets do, but rather with a cross-section of sonatas on each disc, to demonstrate Biss’ conviction that each one stands as a brilliant masterpiece in its own right. This approach – one which he is also taking in his concert cycle – allows the listener to appreciate the individual qualities and distinct structures of each sonata, and the extraordinary development in Beethoven’s piano writing. Biss refutes the notion that Beethoven had three distinct compositional periods as an over-simplification and instead urges the listener to view Beethoven’s compositional style in “a perpetual state of evolution”; even the final sonatas still betray some of his gruffness and a desire to shock, while the slow movements of the early sonatas look forward to later ones in their heart-stopping beauty and eloquence.

As individual works, each is endlessly compelling on its own merits; as a cycle, it moves from transcendence to transcendence, the basic concerns always the same, but the language impossibly varied
Jonathan Biss


Biss is a “thinking pianist”, with an acute intellectual curiosity and an ability to articulate the exigencies of learning, maintaining and performing this music, its challenges and its joys, offering remarkable insights, “behind the notes”, as it were, from the point of view of the performer. His live performances are rich in vivid expression, vitality and flamboyance. He does not stand back from the music, as if in modest reverence, but rather takes a deep dive into its every nook and cranny to winkle out and reveal details afresh.

In his recordings of the sonatas, Biss achieves a similar spontaneity, insight and expressivity, and the set gets off to an energetic start with the Sonata in C minor, No. 5, Op 10/1, its first movement dramatic and commanding, the finale a throbbing, quickfire rondo bookending a slow movement of immense elegance. 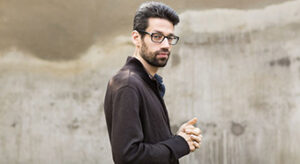 Biss also appreciates Beethoven’s humour and wit, and selects pacing, particularly in the up-tempo movements, to highlight this. He often finds the humour in the music which others often gloss over: quirky ritardandos and accelerandos, and laugh-out-loud fermatas.

Purists may query Biss’s shifts in pace which are not always marked in the score, but I like the often dizzying, sometimes unruly tempi, as if Beethoven couldn’t get his ideas down fast enough. There’s a strong sense of storytelling here too, with dramatic bursts of narrative presented with a gripping immediacy – the finale of ‘Les Adieux’, for example, is bursting with heartfelt joy. Slow movements, meanwhile, become transcendent poetic interludes infused with grace, tenderness and warmth; and these often reveal the true depths of Beethoven’s imagination.

The famous opening movement of the ‘Moonlight’ sonata (too often the subject of rather lugubriously clichéd readings) is hushed and haunting, just teetering on the edge of tragedy, but always eloquent. Biss’s sound is luminous and liquid, his pace a gently rippling moderato. This is contrasted by a finale of almost unrelenting restlessness, occasionally bordering on a comic hysteria. It’s this kind of playing, combined with airy passagework, dramatic tempi, crisp articulation, and a vivid aural imagination that can harness the breadth of the piano’s sonorities (listen to his pedalling in the finale of the ‘Waldstein’ and the kaleidoscopic sound effects he achieves), that had me on the edge of my seat for much of Biss’s recent London concert.

But it’s not all about fleet fingers. Biss gives us thoughtful long-spun melodic lines, well-balanced harmonies, taut, driving rhythms, rumbling tremolandos, dramatic fermatas, carefully-considered voicing, subito dynamic swerves, and colourful orchestration – all devices Beethoven employs to express an amazing range of emotions from joy to despair, wit and uproarious humour, stubbornness and rage, passionate ardour and transcendent serenity. The sheer force of Beethoven’s personality, his capriciousness and inventiveness, is illustrated by Biss with clarity and proportion, beauty and commitment. His Beethoven is direct, lively and spontaneous, ever alert to Beethoven’s shifting moods. And while he undoubtedly respects the composer and his music, Biss does not allow reverence to get in the way of telling an entertaining story (certain other Beethoven pianists would have us believe that because this is “great music”, it must also be Very Serious). Instead, Biss’s approach is delightfully optimistic – one senses his constant curiosity and open-mindedness about this music – and refreshingly liberated from more mainstream interpretative choices. One also has the sense of a pianist with a profound affection for this music which comes from a long association with it, but also an ongoing fascination; for Jonathan Biss, the journey is far from over.

This is, in short, beautiful, thoughtful and incredibly vivid playing, and because of the organisation of the sonatas, each disc feels complete and satisfying in its own right, like a recital. An invigorating addition to the catalogue of Beethoven piano sonatas.