On Conducting: “I am risky, but not insecure”

Not only is Nathalie Stutzmann one of the most renowned contraltos in the world, she is also highly in demand as a conductor, having worked with groups including the Los Angeles Philharmonic, Bamberger Symphoniker, and the BBC National Orchestra of Wales. Born in France and now based in Switzerland, she is in her second season as Chief Conductor of Norway’s Kristiansand Symphony Orchestra, and her third as Principal Guest Conductor of the RTÉ Symphony Orchestra in Ireland.

How do singing and conducting inform each other for you?

Actually the balance is going to 90% of my time as a conductor and keeping 10% as a singer. I love to keep the contact with my instrument. I grew up as a musician, I played bassoon, piano and cello, and for me, the two activities are completely different but of course bring to each other a lot. Conducting has always been a passion which I couldn’t realise when I was younger, as for a woman it was almost impossible to do something really concrete and serious. But now I’m achieving this second dream so I’m extremely happy about it. 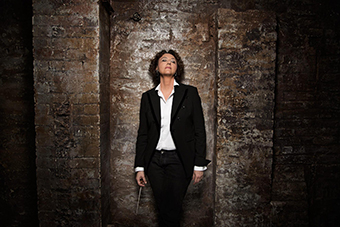 What difficulties did you encounter?

People were very suspicious, which I understand, because most instrumentalists are attracted to conducting, and some are very talented and some are not! Of course people were suspicious; a singer, plus a woman… [there were] a lot of elements against me, but I believed in it, and when I believe in something it’s hard to stop me.

Do you think that times have changed now for women who want to conduct?

I think there are some countries where things are moving in a good way, particularly in Scandinavia and America. Not at all in France, for example. I think there is a presence of many more women conductors on the podium, so that moves in a good positive way, but things are not moving in terms of leading positions. I think this is also very obvious in politics, in big companies. There is such a majority of women working, but at the top, as music directors or conductors, I think we are about fifteen women in the world having an orchestra as a music director. This is ridiculous, and I hope this will change.

I am not a militant, and I rarely talk about it, because I managed to find my way despite the difficulties, but if someone asks me if it was difficult and if it still is, of course it is. If you see the opportunities that young male conductors have compared to young women [you see] it’s difficult. Now it’s improving: for example, young women can study [conducting]. I was not able to do it, so there of course has been some progress. But in the heart, in the mentalities, in some countries, there is no progress.

After all, it’s the orchestra which makes your success or not. If the orchestra likes to work with you and sees you are a proper conductor then you get invited back. 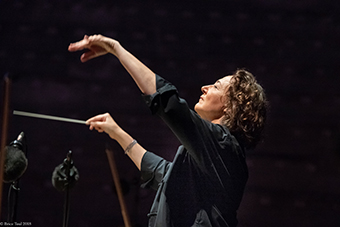 Does it feel different returning to conduct the same group (like in Norway) versus going in as a guest for a one-off show?

Yes, it’s a wonderful thing. With my personality, it’s something I really like because it’s much more a family feeling. I love to know my players by their names. Of course it’s much easier to stay away and be cold and just be ‘professional’ and then go home, but you take much more risks when you have more personal relations with the musicians.

Were you always someone who took risks?

Yes. I am a risky woman. I am a very hard worker, and with my work I’m very disciplined and strict. I also work hard with the orchestra, but it’s always within the target of leaving everyone free during the performance. If this work has been done, you can take risks and be free. If you haven’t done the work, you are blocked in your structure because it’s too insecure. I am risky, but not insecure. It’s not such a big difference, but for a musician, it’s the world. Musicians need to feel secure with you, but they are excited if they feel there is always a little risk somewhere. 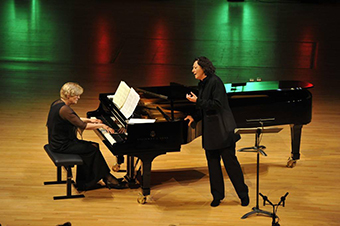 When did you decide to be a conductor?

It came probably at a moment where I felt I had achieved the majority of my dreams as a singer in terms of [recital] partners, repertoire, singing in the most important halls in the world […] I felt the maturity was there and I also felt that it was the right time because I didn’t want people to think I wanted to conduct because I’d lost my voice. “Oh, one more bad conductor who needs to be on stage!”

I think any young conductor would dream to spend twenty years just sitting one metre from the greatest conductors and following rehearsals. You learn so much, it’s food for any kind of maturity: your musical background is growing slowly, you have time to flourish, and I certainly wouldn’t be the same kind of conductor today without that background.

That’s a hard question. I have a strange relation with time. If I work on something, I’m focused on something, I could spend hours on it and I don’t know, and then realise I’m late… I don’t really feel time, and then suddenly [with the Coronavirus] it was so different, that I have a hard time imagining what my normal life is only after three months of crazy Covid life. Isn’t that incredible? I don’t have specific things to relax […] When I have a moment it’s always short and I try to see loved ones, cook a good dinner for my friends, go out to the cinema or the theatre, or just go into nature.