Features
How You Should Feel in the Key of C Major
by Maureen Buja February 19th, 2016 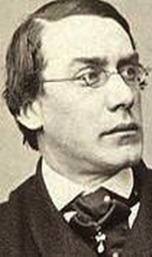 The Austrian composer and pianist Ernst Pauer (1826-1905) was a student of Mozart’s son, Franz Xaver Wolfgang Mozart, before moving to London in 1851. He is one of the first piano professors at the Royal College of Music and also worked with the music faculty at the University of Cambridge.

For the key of C major, he gave its characteristics as “A pure, certain and decisive manner, full of innocence, earnestness, deepest religious feeling.” For the works associated with these feelings, he chose works by Mozart, Weber, Beethoven, Mendelssohn, and Haydn.

For Mozart, he chose the aria “Done sono I bei momenti?” from Act II of The Marriage of Figaro. This is the Countess’ aria as she thinks on her past happiness when the Count was still attentive and things weren’t so difficult.

Mozart: Le nozze di Figaro, K. 492: Act III: Aria: Dove sono i bei momenti? (Leontyne Price, soprano; RCA Italiana Opera Orchestra; Francesco Molinari-Pradelli, Cond.)
The second aria that Pauer chose was “Vedrai, carino” from Act II of Don Giovanni. This is Zerlina’s aria that she sings to poor Masetto after Don Giovanni has beaten him up. It is indeed an innocent aria, for despite declaring that she has a balm that no pharmacist knows how to make and she carries it within her, she tells him it’s her beating heart.

Mozart: Don Giovanni, K. 527: Act II Scene 6: Aria: Vedrai, carino (Zerlina) (Teresa Berganza, Zerlina; Paria National Opera Orchestra; Lorin Maazel, cond.)
From Weber, he chose the “Chorus of the Maidens” from Der Freischütz. This would be the chorus of bridesmaids in preparation for Agathe’s wedding in Act III, Wir winden dir den Jungfernkranz. Again this is a song of innocence as they dress the bride for the wedding.

Weber: Der Freischütz: Act III: Horch, da krommen – Wir winden dir den Jungfernkranz (Berlin Philharmonic Orchestra; Nikolaus Harnoncourt, cond.)
From Beethoven, he chooses the String Quintet in C major, Op. 29, a strangely neglected work in chamber music, and the Finale of his Symphony No. 5. It is of note that Beethoven’s Fifth Symphony is actually in the key of C minor, but it is this last movement where C major comes to the fore.

Beethoven: String Quintet in C major, Op. 29: I. Allegro moderato (Gil Sharon, Fine Arts Quartet)
Beethoven: Symphony No. 5 in C Minor, Op. 67: IV. Allegro (Stuttgart Radio Symphony Orchestra; Roger Norrington, cond.)
If the String Quintet can be viewed as characterizing “a pure, certain and decisive manner,” it seems that the Fifth Symphony Finale can be all that plus carrying a feeling of “earnestness.”

Mendelssohn’s song “Oh Rest in the Lord” from the oratorio Elijah is the first of Pauer’s examples to depict “deepest religious feeling” when the Angel tells Elijah to trust the Lord and not to worry.

Mendelssohn: Elijah: Part II: O rest in the Lord. (Janet Baker, Angel; New Philharmonic Orchestra; Rafael Fruhbeck de Burgos, cond.)
Mendlessohn’s Lauda Sion, op. 73, is a cantata for choir and orchestra written in 1846, the same year he was writing Elijah, and is about the mysteries of the Eucharist and the Catholic’s doctrine about transubstantiation.

Haydn: Die Schöpfung: Part I: Die Himmel erzahlen die Ehre Gottes (The heavens are telling the glory of God) (Bavarian Radio Symphony Orchestra; Rafael Kubelik, cond.)
After all of this ebullient C major, you should be feeling rather happy!