Artists Interviews
What Will We Play in 300 years?
An Interview with Composer Bun-Ching Lam
by Maureen Buja August 9th, 2015 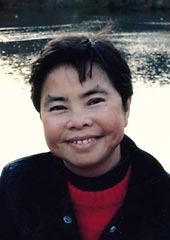 Macau-born composer Bun-Ching Lam spoke with us the other day and the conversation ranged from the rise of Asia as a music power to the advantages to being a 21st century composer.

Bun-Ching was born in Macau in 1954 and did her undergraduate work at the Chinese University of Hong Kong. She entered as a piano student but completed her work by winning a composition contest sponsored by the then-Hong Kong Conservatory. She’d observed the composers in the department, including Richard Tsang, having such fun composing that she wanted to be part of that crowd. Her graduate work was done at University of California at San Diego where she worked with composers such as Bernard Rands, Robert Erickson, Roger Reynolds, and, most importantly, Pauline Oliveros. She said that Oliveros didn’t teach her how to compose, because that’s not what she did, but taught her the most important skill of deep listening.

When asked to describe her musical style, Bun-Ching said that she was post-modern, post-minimalist and anything else she could be to be a 21st century composer. Although she noted that she might be getting a little retro these days, she also said that she felt she still hadn’t written her best pieces yet. 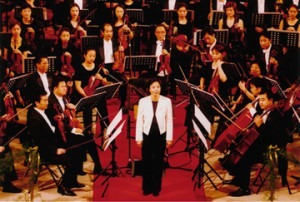 When we asked about her many works for western ensemble and Chinese instrument(s), she said that when she came to New York in the 1980s, there was nothing for Chinese instruments. It was the appearance of the Chinese pipa player Wu Man that gave Bun-Ching the opportunity to write her first piece for pipa, the solo work Run in 1993.

Lam: Run (Wu Man, pipa)
When she started to write for pipa and orchestra, it was important that the orchestra not drown out the pipa. She solved this problem by turning the orchestra into a giant pipa: the pipa could give the initial attack and the orchestra would continue. Her major pipa concerto, Song of the Pipa in 2001, was written for the New Jersey Symphony Orchestra. Many of Bun-Ching’s works include Chinese instruments, including her important opera Wenji, on the early 3rd-century Han dynasty poet and musician Cai Wenji.

We talked about the modern composer and the opportunities that are available. She said that she saw Asia (China, Singapore, Malaysia) as some of the places where new music is happening. Classical music was still important. She noted sadly that in the west, students wanted to play video games or baseball rather than practice. As a composer, she loved her time when she was at university, both as a student and as a professor. As a student, she had access to the full facilities of the school, including libraries, and as a professor, she had all of that plus a steady income, and almost more importantly, access to students. Having the summers off to compose was also a benefit!

For the past several years, she’s had a steady set of commissions from the Macau Orchestra to write pieces that reflect Macau. Her last work, given its premiere in May, was her Macau Cantata. It was a setting in 7 languages of text by 7 people who were important to the history of Macau, beginning with the Jesuit Matteo Ricci. These commissions will give Macau an important musical mirror of the city and the society rare in other musical communities.

When we talked about modern commissions, particularly on the orchestral level, she said “What music will we play in 300 years” if we don’t start writing it now? Beethoven is all well and good, but does he really speak to the 21st century?