Composers Inspiration
The West’s Fascination With the East
by Maureen Buja September 19th, 2018 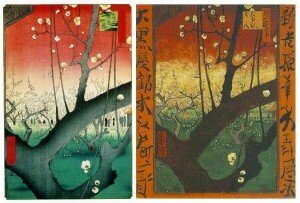 Gilbert and Sullivan’s The Mikado (1886) wasn’t the first sign of the West’s fascination with the exotic East. The Paris Exposition of 1867 brought Japanese art to the world in its first national pavilion and artists including Vincent van Gogh and composers such as Debussy took in Japanese influences as part of their post-impressionist art. 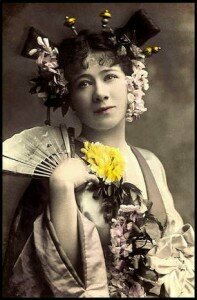 Marie Tempest as Mimosa San in The Geisha

In a more popular vein, starting in the last decades of the 19th century, the exotic East was a source of peril and imminent danger. Novels such as M.P. Shiel’s The Yellow Danger (series started 1898) and Sax Rohmer’s Fu Manchu (series started 1913) placed mysterious villains from China at the centre of their action. Mysterious drugs, the villains’ fascination with western women, the threat of ‘white slavery,’ and the use of fanciful torture devices brought a shiver of danger the genre’s readers.

On the stage, shows such as The Geisha (1885), a comedy where Lt. Fairfax falls in love with the geisha Mimosa San until his fiancée dresses herself as a geisha, the lovely Roli Poli, and recaptures his heart, reinforced the idea that the Western hero was the only man for our Western heroine. 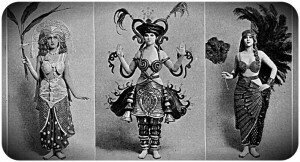 Other musical comedies with evocative titles such as San Toy (1899), A Chinese Honeymoon (1901), The Blue Moon (1905), The White Chrysanthemum (1905), The New Aladdin (1906), and See See (1906) became popular. One of the most popular was Chu Chin Chow (1916), which updates the story of Ali Baba and the 40 Thieves. Hitting the London stage during WW I, the show was popular with troops on leave from the Western Front. The costumes were scanty enough that the Lord Chamberlain, the theatre censor, had to insist that they be made less naughty. 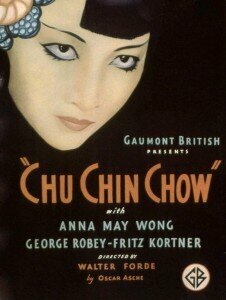 Songs such as ‘Any Time’s Kissing Time’ from the show remained in the popular repertoire for decades after the show closed.

Norton: Chu Chin Chow: Act II: Any time’s kissing time (London Symphony Orchestra; John Hollingsworth, cond.)
From literature to music, the East, whether Japan, China, or some made up land located anywhere in East and West Asia, the literature and music found heroines and villains. In art, the reflection was a bit more subtle, but it’s inescapable that the East proved to be a valuable source for Western inspiration.