Composers Inspiration
I Am the Very Model: Gilbert and Sullivan and Light Opera III
by Maureen Buja January 30th, 2018 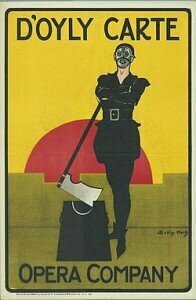 Poster for the 1897 production of The Yeoman of the Guard

In their late years, Gilbert and Sullivan weren’t as successful as they had been in their early years. Yet, their legacy still lives on and even over a century later, their music keeps reappearing, often with new lyrics.

Ruddigore (1887), though not a flop, was not the outstanding success that D’Oyley Carte and G&S had seen with The Mikado. It was followed by The Yeomen of the Guard (1888), which was the only G&S opera with a serious ending. The critics recognized that Gilbert was trying to write something a bit more serious, and that his normal parody and poking fun were set aside. Even in the Overture, Sullivan tried something new – rather than a mix of the melodies of the operas, he wrote a separate overture in strict sonata form, as was commonly done in the Classical period.

Sullivan: The Yeoman of the Guard: Overture (Royal Ballet Sinfonia; Andrew Penny, cond.)
The Gondoliers (1889) was another success, a tale of children mixed up at birth, a lost heir, and class distinctions, it was one of the longest-running productions of the time. 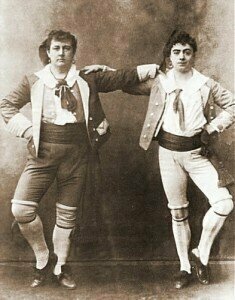 A dispute between Gilbert and Carte, with Sullivan siding with Carte, in 1890, nearly led to the end of the partnership. G&S each felt that he was subjugating his art to the other. They resolved their conflict, and brought out two further operas, Utopia, Limited (1883) and The Grand Duke (1896), but neither was a success.

Sullivan died in 1900 and Gilbert in 1911 but the D’Oyley Carte Company, under Richard D’Oyley Carte, then his wife Helen, then their son Rupert, then his daughter Bridget put on G&S operas exclusively until the Company’s dissolution in 1982. They also licensed the works internationally, controlling productions until the British copyrights expired in 1961. This gave an unsurpassed platform for the continuing of a stage tradition.

The comic operas of G&S influenced every stage composer who followed them, from P.G. Wodehouse through Irving Berlin to Andrew Lloyd Webber. We wouldn’t have the clever versifying by Cole Porter, Ira Gershwin or Lorenz Hart without Gilbert’s models.

A work such as The Mikado was changed and parodied in many different ways, including John Philip Sousa’s homage to it as Mikado March, incorporating many different songs into a medley,

a Cool Mikado (1962 film) and so on. The then-topical parts of the operas are constantly updated – The Lord High Executioner’s song from The Mikado has been updated in current productions to include selfie sticks and Jeremy Corbyn; another takes on modern slang, the iPad, and American Idol.

Noël Coward (1899-1973) noted that when he was growing up everyone, from his nursemaid to his parents and his aunts and uncles could sing G&S songs. Light music was popular music and popular music is influential.