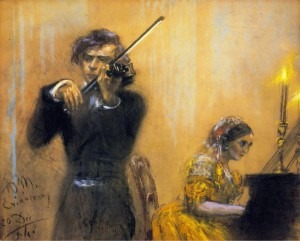 One might reasonably assume that anything written by Robert Schumann for the concerto stage would be played the world over. But that simply is not the case, as onstage performances of his Violin Concerto remain a rarity. So, what actually happened to turn this work by a legacy composer into an unsung concerto? On a cold winter’s day in February 1854, Robert Schumann attempted to commit suicide by jumping into the icy waters of the Rhine River. Although he somehow managed to survive, he was quickly confined to a mental health asylum in the little village of Endenich. Shortly before his attempted suicide, and unbeknownst to the general public, Schumann had feverishly worked to compose a Violin concerto. This concerto, completed in a mere three weeks, was dedicated to his close friend, the violinist Joseph Joachim. However, Joachim was highly critical of this composition and suggested that Schumann’s deteriorating mental health was clearly evident in the sound of this composition. He even went so far as to use phrases like “mental lassitude,” “bewildering passages,” “morbid brooding,” and “tiresome repetitions.” In the end he convinced Clara Schumann and Johannes Brahms, who were editing the first complete edition of Schumann’s music, to suppress it. Together, the three decided that the piece should never be published, and Joachim finally bequeathed the manuscript to the Prussian State Library attaching the stipulation that it should not be looked at until 100 years after the composer’s death. It was not until 1933 that Joachim’s grandniece Jelly d’Aranyi inadvertently found the autograph manuscript. An avid spiritualist, she claimed Joachim had told her about the work during a spiritual visitation. Because of her Jewish heritage, however, she was unable to give the first performance in Germany in 1937. That honor fell on Georg Kulenkampff who premiered the piece with extensive cuts, and with the solo part extensively re-written by Paul Hindemith. The first faithful performance of the Schumann score was given a month later by Yehudi Menuhin, first in a violin and piano reduction, and then with the New York Philharmonic under the baton of Georges Enescu.