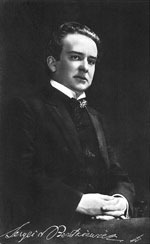 Sergei Bortkiewicz (1877-1952) described himself as a romantic and a melodist, and he had an emphatic aversion of what he called modern, atonal and cacophonous music. His musical style builds on the sounds and structures of Chopin, Liszt and the unmistakable influences of Tchaikovsky, Rachmaninov and early Scriabin. Born in Kharkiv in the Ukraine, Bortkiewicz initially studied in St. Petersburg but soon furthered his musical education at the Leipzig Conservatory. After establishing himself as a pianist and composer he initially settled in Berlin, but during World War I he was forced to leave Germany. Bortkiewicz was back in Kharkiv just in time to witness the Russian revolution. The Red Army surrounded his estate, and the composer barely managed to escape by steamer to Constantinople in November 1919. By 1922 Bortkiewicz had arrived in Austria, and obtained citizenship in 1925. Yet, in a case of history repeating itself, Bortkiewicz went to live in Paris and Berlin only to be forced to leave Germany again in 1933. This time, he faced persecution from the Nazis and he was banned from performing. In addition, the greater part of his printed compositions, held by his German published Rather & Litolff, were destroyed in the bombing of German cities. Financially destitute he returned to Vienna with his wife and both experienced unbearable conditions throughout the Second World War. As he writes to a friend on 8 December 1945: “I am writing to you from my bathroom where we have crawled in because it is small and can be warmed on and off with a gas light. The other rooms cannot be used and I cannot touch my piano. This is now! What awaits us further? Life is becoming more and more unpleasant, merciless. I teach at the Conservatory with the heat at 4 degrees, soon even less!” Bortkiewicz died on 25 October 1952 in Vienna and his music gradually faded away. His colorful and delicate imagination, his idiomatic writing for piano and his undisputed gift for melody created an attractive and appealing style that was popular with listeners but not with critics. Luckily, his music is gradually being rediscovered.