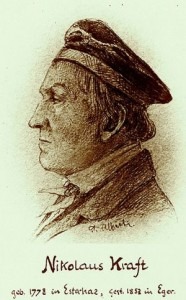 Antonín Kraft was one of the earliest cello superstars! A close personal friend of Haydn, Mozart, and Beethoven he became a founding member of the Schuppanzigh Quartet and helped to establish the tradition of modern string quartet playing. Considered one of the greatest cellists of his time, both Haydn’s Cello Concerto No. 2 and the cello part in Beethoven’s Triple Concerto were supposedly written for him. Yet, it was his son Nikolaus who claimed to have played the premiere of the Beethoven Triple, and who would eclipse his father’s fame.

Nikolaus Kraft (1778-1835) began his cello studies with his famous father at age 4. Enormously talented, by the age of 6 he already played one of his father’s compositions in concert, and the father and son duo appeared in concerts in Budapest, Dresden, and Vienna. Significantly, the 9-year old Nikolaus performed with Mozart in Dresden on 14 April 1787! Young Nikolaus continued his cello studies in Berlin, and appeared in highly acclaimed concerts in Holland, Prague, and Leipzig. By 1809, Prince Lobkowitz offered him a life pension on the condition that he would only play in the palace, never appearing elsewhere without the prince’s express permission. Initially Nikolaus agreed, but over time the arrangement became rather cumbersome, and when the prince fell into financial difficulties, Nikolaus was free to continue his concertizing activities. He undertook a noteworthy tour of the Rhein region with Johann Nepomuk Hummel, and his artistry was glowingly described in the press: “Serenity joined with the highest degree of assurance and technical ability, the clarity and richness of every single tone on that difficult instrument coupled with studied and colorful bowing – these are the foremost qualities of this virtuoso. To those we might add nonchalance and a performance style that could serve as model because it rises above the usual affectation: it is refined and reveals informed good taste.” While tuning his cello in 1834, Nikolaus suffered an incurable injury to his finger in 1834. A failed operation forced him to retire from the concert stage, but allowed him to focus on teaching and composing. His oeuvre consists of virtuoso compositions for the cello, among them four unsung concertos for the instrument.