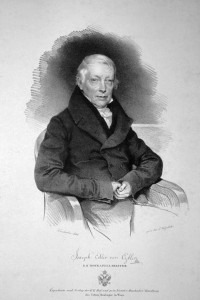 The comparatively late addition of the clarinet family to our modern catalogue of musical instruments at the turn of the 18th century immediately spawned countless generations of woodwind virtuosi. And the eccentric and not entirely reliable Anton Stadler quickly rose to superstardom. A Viennese critic wrote after hearing Stadler perform, “I would not have thought that a basset clarinet could imitate the human voice so deceptively.” As is well known, Wolfgang Amadeus Mozart was captivated by the unique sound qualities of the instrument, not to mention Stadler’s exception performance mastery, and composed his Clarinet Concerto K. 622 and the Clarinet Quintet K. 581 specifically for the clarinetist. But Mozart wasn’t the only one who found the clarinet and Stadler’s performances irresistible! There was also Joseph Leopold Eybler (1765-1846), a student of Mozart’s who received a glowing testimonial from the master. “I, the undersigned, attest herewith that I have found the bearer of this, Herr Joseph Eybler, to be a worthy pupil of his famous master Albrechtsberger, a well-grounded composer, equally skilled at chamber music and the church style, fully experienced in the art of the song, also an accomplished organ and clavier player; in short a young musician such, one can only regret, as so seldom has his equal.” Mozart and Eybler remained close friends, and Constanze Mozart asked Eybler to complete her husband’s Requiem. Because of his deep respect for Mozart, however, Eybler was only able to add ten notes to the soprano line before passing the job to Franz Xaver Süßmayr! During his career Eybler was the choir director for the Carmelite Church in Vienna and in the service of Empress Marie Therese. After Salieri’s death he became the Hofkapellmeister, but suffered a stroke while conducting the Mozart Requiem in 1833. His Clarinet Concerto dates from 1798 and is predictably written for and dedicated to Stadler. Closely demonstrating the musical influences of Mozart and Haydn, it is nevertheless the only clarinet concerto in existence that actually makes use of the timpani in the orchestra!