Mozart and the Met 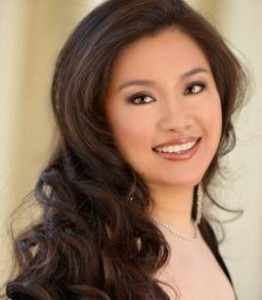 ‘My life is very simple,’ Guanqun Yu says. ‘I read the bible, and sometimes go to the cinema to see movies, and I like museums. It sounds like I’m a nerd!,’ she exclaims. ‘I have a very boring life… apart from being an opera singer.’

‘Boring’ and ‘simple’ aren’t words that instantly spring to mind when talking about a career as an internationally-renowned soprano – Guanqun Yu has recently performed at opera houses in Cologne, Hannover, Berlin, Los Angeles, and New York in roles such as Mimi (La bohème), Liù (Turandot), and the Countess Almaviva (The Marriage of Figaro), with many more exciting things on the horizon.

Originally from China, Guanqun moved to Italy to study in 2010, making her European debut as Elettra in Mozart’s Idomeneo.

‘I saw they were auditioning for Idomeneo, and went in for a small part, but then the music director said ‘No, no, no – you need to go for Elettra [a main role].’ I remember thinking ‘Huh?’, and I can still remember his face as he said ‘Oh don’t worry, it’s nothing to worry about – it’s only Mozart!’

Mozart’s vocal writing is loved by many singers for the way it lies naturally for the voice, but this is not always the case; currently in the middle of a run of Don Giovanni at Oper Frankfurt, Guanqun’s character, Donna Anna, brings its own vocal hurdles.

‘It’s interesting, people say Mozart is healthy for the voice… but from time to time you find yourself up against a challenge. In Don Giovanni, Donna Anna is yelling all the time, and I’m asking myself ‘why’?

‘She’s blaming herself for her father’s death – she’s in a very difficult situation. You have to put yourself in that situation, and then you see why Mozart wrote this part that puts a strain on you.’

Guanqun studied the accordion as a child, and wasn’t encouraged to start singing until 2001, when she was 19 years old. ‘I was just very curious about opera,’ she says, speaking of when her love for singing grew. ‘I did opera workshops, but I never actually saw an opera until 2007.’ 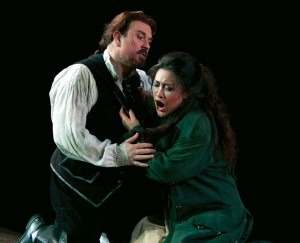 With Franco Vassallo in Il Trovatore at the Met
Credit: http://www.operanews.com/

That opera was Turandot – and marked a turning point in her decision to become an opera singer. ‘I don’t remember much about it, but what I do remember was being so amazed by Jose Carreras. There he was, not just singing, but lying on the floor, whilst singing Nessun Dorma, an extremely high aria – it was then that I really knew what opera was.’

One week after winning second prize in the Operalia singing competition in 2012, Guanqung received a call from the Metropolitan Opera, asking if she was free to come and sing Leonora in Il Trovatore.

Conquering the pre-show nerves, Guanqun proved a hit in New York, and is returning there next year to sing in Turandot, Carmen, and Don Giovanni. What else does the future hold?

‘You don’t know what’s going to happen tomorrow. At the moment I do everything the best I can, and that’s the only thing I can choose. I try to control my schedule – in general I want to do lots of lighter Mozart and bel canto before I go to the bigger roles, the Verdi, the Puccini. Basically you can call me a Mozart singer!’