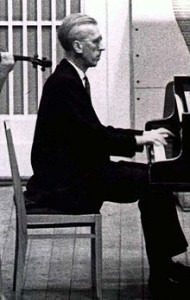 For primarily political reasons, the music of Dmitri Kabalevsky never really enjoyed great popularity in the West. Despite writing in a readily accessible musical style that was primarily rooted in folk music, his name was listed in the infamous 1948 Party Decree authored by Zhdanov. The decree attacked many leading Soviet composers—including Myaskovsky, Prokofiev, Shostakovich and Shebalin—for not writing music which appealed directly to public taste. Unlike his compatriots, Kabalevsky admitted his mistakes, composed a number of concertos for Russian Youth, and escaped censure. Making ample use of folk melodies, his Violin Concerto was first performed by the 18- year old Igor Bezrodny, and the Third Piano Concerto premiered by the 14-year old Vladimir Ashkenazy in 1953. The central piece in a trilogy of concertos was his Cello Concerto No. 1, composed between 1948 and 1949. A young Svyatoslav Knushevitsky, who was accompanied by a youth orchestra from the Moscow Conservatory, premiered it in 1949. Essentially lyrical, and with a flavor of Russian and Near Eastern folk music found in many of his other works, the piece was immediately popular. Clearly, Kabalevsky was not as adventurous as in his contemporaries in terms of harmony, and he drew heavy criticism from some quarters because he rejected the new direction in music. Preferring conventional diatonic harmonies, interlaced with chromaticism and major-minor interplay, his post-war works have been characterized as “popular, bland, and successful.” Frequently compared to Khachaturian, his music was spitefully described as “Prokofiev-with-water.” Be that as it may, Kabalevsky’s most important contribution to music is his consistent efforts to connect children to music. Kabalevsky wrote, “Children have always held a great place in my musical life. For me, there can be neither music nor life without children. I have composed music and written books for them, talked about music and taught at music schools, conducted children’s choirs and orchestras.” At Kabalevsky’s funeral, his colleague and friend Sir Frank Callaway eulogized, “Kabalevsky was a unique personality in international music and music education, whose greatest happiness was to write music for children.”