Artists Interviews
The New World of the New Composer: An Interview with William Cole
by Maureen Buja December 27th, 2016 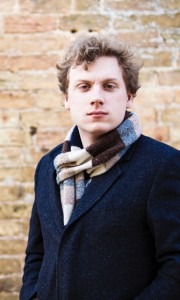 William Cole is a recent graduate of Cambridge and a new student in the Masters in Composition and Conducting at the Royal Academy of Music in London. We spoke with him recently to talk about what a new composer does today.

When we look at his website we see the new face of the composer/conductor in the 21st century. He’s written a number of small ensemble pieces, written more for voices, and has been involved in a couple of very interesting production companies.

We asked about his choral writing and he agreed that, perhaps, it was something that was individual to the British music scene. He grew up in the choral tradition, being in choruses from his childhood through university and is a confirmed speaker of “the language of choral.” The choral tradition in England, which can extend from your primary school choirs, through church choirs, and onto collegiate and professional choirs, is always looking for new music. He did note, however, that, unlike orchestral music, there’s little rehearsal time given to the choirs. This means that the composer has to be extremely practical in writing for voices. Wacky won’t work, and for most performances, there’s no clapping at the end. The work is generally part of a larger ceremony and has to fulfil its own function.

When we talked about how he saw himself moving from the world of small ensembles (piano trios, solo works for violin, piano, and organ) into the larger world of orchestral writing, he spoke about what he was learning at RAM. His orchestration class, for example, was designed to help composers write to hear ‘the sound you hear in your head.’ He knows that the students he’s working with and alongside of now will be the musical stars of tomorrow and he’s able to start learning about their own performing or compositional idiosyncrasies.

He’s been involved with the young opera company Opera Lyrica and was the conductor for their recent production of Così fan tutte. Opera Lyrica is built around the new singers who are poised between the end of their formal university training and the start of their professional operatic careers. Outside university, it’s difficult for these singers to learn and practice repertoire, such as Così, and Opera Lyrica provides that platform. When we spoke about his conducting training at RAM, he laughed, noting that he’s going from performing an entire Mozart opera to spending 3 months delving into the complexities of one movement from one Beethoven symphony. He said that having the time to explore a work so very deeply was an important part of his education both as a conductor and a composer.

A very modern project he’s been involved is Filthy Lucre. This taps into the young audiences that are familiar with classical and contemporary music and modern genres in the arts. Someone might come for the poetry of an evening and be captured by a new sound. Recent projects have included creating a film setting Steve Reich’s work Vermont Counterpoint, a project entitled Urban Decay and Regeneration, and one called Sound Icons, that involved the creation of new instruments from grand pianos.

When we talked about how lively the arts scene in London and the UK in general seemed to be, Mr. Cole talked about the role that public funding had in driving innovation. Even in these uncertain economic times, there remains a place for the arts but with the scramble for funding, presenters have to demonstrate a genuine public benefit in their projects – they have to reach new audiences and have to educate those audiences in order to receive support.

One recent work he’s done was for a private commission. He was asked to write a 5-minute piano work with the Mozart Clarinet Concerto as its basis. His work, Rondo, took as its inspiration the wonderful bits of music that Mozart couldn’t exploit in his own final-movement rondo for the Clarinet Concerto. As Mr. Cole noted, ‘there are lots of great tunes, but you hear them once, due to the nature of rondo form.’ He took this unexplored melodic material and used it as the basis for his own work.

Rondo by William Cole
Performed by Linda Yim
As a new composer, Mr. Cole is discovering his real role in the world of music. He’s finding that, as a composer, he’s not as much in control of the final product as he might have thought. His new work, Rondo, has been performed twice and each performer took a different position on the piece. The first performance was aggressive and pushing the already quick tempo and a second performance by another pianist on the other side of the world found a rounded elegance in the work that he, as the composer, hadn’t thought about when he wrote the piece.

So this is the new world of the new composer – actively writing for the world he knows and preparing for the future through in-depth study. At the same time, he’s active in both traditional performances and part of innovative multi-media production. We look forward to hearing what’s next!