Amy Beach (1867-1944) was an exceptional musical prodigy. Gifted with perfect pitch and impeccable memory she was able to accurately sing 40 songs by age one. She taught herself to read at age three, and composed a number of dances at age 5. She took formal piano lessons with her mother at age 6 and gave public recitals at age 7. Even as a young child she knew “no other life than that of a musician could ever have been possible for me.” Yet, her parents did not support a professional music career for their daughter. Amy did give her debut concert at the Boston Music Hall in 1883, however, in terms of composition she was essentially self-taught. Once she married a Boston surgeon, Amy agreed to limit performances to one public recital a year, and following her husband’s wishes, devoted herself more to composition. During her 25 years of marriage she composed a symphony and a piano concerto alongside songs, chamber, choral and music for solo piano. Widowed at 43, she went to Germany to present her compositions and revive her career as a pianist, under the name Amy Beach. On her triumphant return to Boston in 1914, she devoted herself to concert tours and composition, completing the balance of her three hundred works, almost all published and performed. 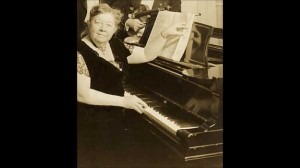 Her piano concerto originated in Boston between September 1898 and September 1899. The first public performance on 7 April 1900 featured the composer as soloist, and the critic Philip Hale wrote that it was “a disappointment in nearly every way.” Undeterred, Beach would subsequently play her concerto in Chicago, Philadelphia, Leipzig, Hamburg, and Berlin. Eventually, opinions changed and the work was praised as an overlooked masterwork. A San Francisco critic writes, “Its four movements are packed with incident—beautifully shaped melodies (several of them drawn from her songs), a forthright rhythmic profile and a vivacious and sometimes contentious interplay between soloist and orchestra. The piano part is as flashy and demanding as a virtuoso vehicle calls for, but there is also an element of poignancy about it, a sense of constraint that seems to shadow even the work’s most extroverted passages.”