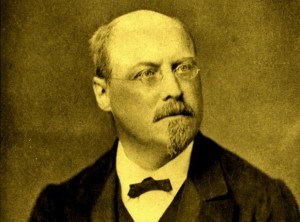 Today, the German-Swiss composer Joachim Raff (1822-1882) is primarily remembered as an assistant to Franz Liszt in Weimar. In fact, he actually lived in the Villa Altenburg, Franz Liszt’s home in Weimar. He was Liszt’s secretary and copyist, and apparently also had a considerable hand in orchestrating Liszt’s work. He writes to von Bülow, “I have cleared up Liszt’s first concerto symphonique for him, and now I must score and copy Ce qu’on entend sur montagne.” He also claimed that he had fashioned the orchestration for Prometheus and the symphonic poem Tasso. Written for the centenary of Goethe’s birth, Tasso was composed in 1849 and had been scored by August Conradi. Liszt, however was dissatisfied and handed the music to Raff, who produced a new version in 1851. By 1856, however, Raff had grown tired of his subordinate position and he also had some serious disagreements with Liszt’s mistress, the Princess Carolyne Sayn-Wittgenstein! So he packed his bags, headed for Wiesbaden and devoted himself to composition. In 1878 he was appointed as director of the Hoch Conservatory in Frankfurt, and he engaged Clara Schumann as a piano teacher! Raff even established a dedicated class for women composers, the first of its kind in Germany. Although 4 of his 6 operas remained unperformed, his orchestral works, chamber music and exceptionally large number of piano pieces enjoyed a substantial degree of success. 8 of his 11 symphonies have an overt programmatic element, exerting a clear influence on the musical styles of Jean Sibelius and Richard Strauss. Raff’s concertos, including works for violin, piano, and cello date from his time in Wiesbaden.

Joachim Raff: Cello Concerto No. 1, Op. 193
His first cello concerto premiered in 1874 in Dresden and featured the virtuoso Friedrich Grützmacher. The soloist had previously approached Raff and asked to “pacify us poor cellists in our truly unbearable circumstances through a concerto for our instrument.” And shortly after the performance he writes, “At the many performances, which your Violoncello Concerto has already experienced at different places and from various players, and which will increase significantly, it has given great pleasure. I myself feel the same as the success predicted by me is confirmed so brilliantly.” Other cellists eagerly took up the work and it was published in Leipzig in April 1875.