The pines at the Villa Borghese

We open in the morning with children playing and screaming, dancing to a nursery rhyme, and generally being children in the morning. They play as being soldiers, a foreshadowing of a later movement.


They disappear and we’re suddenly in the shade of the trees at an entrance to a catacomb. Mournful psalm-singing can be heard in the background. 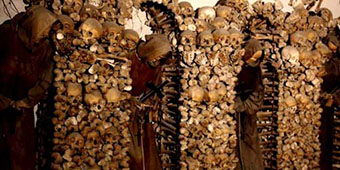 In the Roman catacombs

At night, under the branches of the pines on top of the Janiculum, a nightingale sings. Although just used to evoke the moment, this is actually a significant action in music history because the nightingale is to be performed from a recording, made, according to history, at the American Academy of Rome on the Janiculum. The use of pre-recorded sound with an orchestra had its start here.

The pines of the American Academy on the Janiculum

Now the full glory of the past comes to life. Out on the Appian Way, one of the old Roman ways into the city, a vision from the past comes to life: an army of ancient Romans, returning to their capital in triumph at dawn. Historians note that the Roman army marched at 105 steps per minute, and you can hear this in the percussion. To get the effect of the very earth trembling under the step of this mighty army, Respighi enlisted the help of the organ to have it sound a low B flat on its 8-foot, 16-foot, and 32-foot pipes. The rough brass sound is to imitate the Roman buccina, a great circular trumpet. Respighi did all he could through music to evoke the glory that was ancient Rome, as see through its trees.

The pines of the Appian Way

Respighi takes us from the present day to the ancient past, looking solely at the trees that are the backdrop to everything in Rome. As they stand over the city on the top of hills, or as they line the ever-straight Roman roads, the pines of Rome define the city.