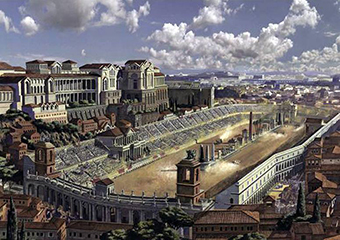 The last of Ottorino Respighi’s celebrations of Rome looked at its festivals. Feste romane was completed in 1928 and received its premiere under the baton of Toscanini in February 1929.

Roman Festivals starts with the ancient history of the Romans and their circuses. Respighi sets the first movement at the Circus Maximus. In its day, it was the largest stadium in the world and could hold an audience of 150,000. Few stadia today match that size: the Rungrado 1st of May Stadium in Pyongyang, North Korea, has a capacity of 114,000. Michigan Stadium in the US holds 107,601 people and the Melbourne Cricket Ground in Australia can hold 100,024 people. Nobody matches the Romans! 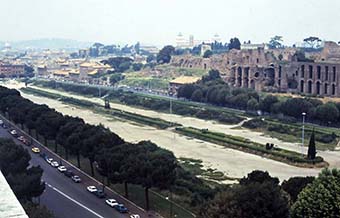 Respighi made his own notes on each of the movements. For the first movement, he gave the program as: ‘Circus Maximus – a threatening sky hangs over the Circus Maximus, but it is the people’s holiday: Ave Nero! The iron doors are unlocked, the strains of a religious song and the howling of wild beasts mingle in the air. The crowd comes to its feet in a frenzy. Unperturbed, the song of the martyrs gathers strength, conquers and then is drowned in the tumult.’ It is through Respighi’s great skill in orchestration that he’s able to give us such a detailed audio picture. The appearance of the martyrs is of note because it’s the religious side of Rome that’s shown in the remaining movements. 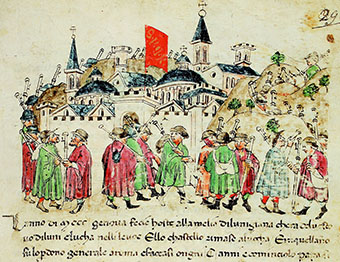 The Jubilee is the time when the Catholic Church, from its seat in Rome, grants a year of dispensation and universal pardon. Pilgrims flock to Rome to visit all the churches. Respighi describes it as: ‘Jubilee – pilgrims trail down the long road, praying. Finally, from the summit of Monte Mario appears to ardent eyes and gasping spirits the holy city: Rome! Rome! A hymn of praise bursts forth, the churches ring out in reply.’

The vineyards at Frascati

For the third movement, it’s the fall celebration. The wine has come in to the Castelli Romani, located about 20 km outside Rome – the Frascati wines that you know so well come from here. Respighi says: ‘‘October Festival – it is the October wine harvest in the Roman Castelli covered with vines; echoes of the hunt, tinkling bells, songs of love. Then in the tender twilight arises a romantic serenade on the mandolin.’ All the good things in life come together for the fall celebrations – eating and drinking and singing. 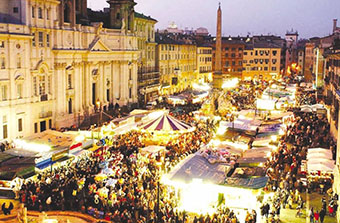 Epiphany at the Piazza Navona

Epiphany, held in on January 6, is a central Christian festival where, 12 days after his birth, the baby Jesus was recognized as the God incarnate. Twelfth Night, or Three Kings’ day, or Little Christmas, no matter what you call it, it’s a day of celebration.

Respighi tells us what to expect: ‘Epiphany – It is the night before Epiphany in the Piazza Navona; a characteristic rhythm of trumpets dominates the frantic clamour; above the swelling noise float, from time to time, rustic motives, saltarello cadenzas, the strains of a barrel organ in a booth and the call of a barker, the harsh song and the lively stornello in which is expressed the popular sentiment ‘Lassatece passa, semo Romani!’ (‘We are Romans, let us pass!’).’