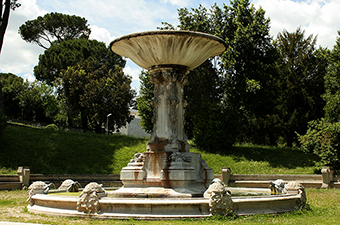 One of the fountains of the Valle Giulia, the Fontane delle Tartarughe

Ottorino Respighi (1879-1936) is best known for his works about the city of Rome: The Pines of Rome, Roman Festivals, and, first of all, The Fountains of Rome. Respighi, who came from Bologna, was at first intimidated by the ancient city and it was by looking at its past that he was able to come to agreement with the city. 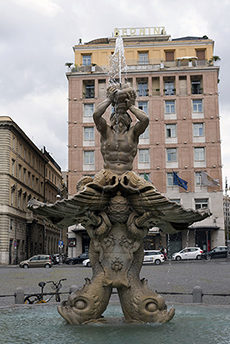 The Fountains of Rome was completed in 1917, some four years after he’d arrived in the city. Although intended to be played in one movement without a break, the piece actually falls nicely into four sections, each showing a particular fountain at a particular time of day.

The first fountain, La fontana di Valle Giulia all’alba, is depicted at daybreak, with droves of cattle coming into the city. Located in the Villa Borghese Park, the Valle Giulia doesn’t really have a named fountain, but rather three or four possible fountains. The music opens at dawn, and is a bit sleepy, with the sunlight just starting to pick out the details of the area.


The morning fountain is the Tritone Fountain, and in honor of this god of the sea, the music takes on a new power. The Tritone fountain in the Piazza Barberini, shows the water god, supported by four dolphins, sitting on shells, as he blows through his conch shells. The papal tiara, crossed keys, and the bees signal the ownership of the Barberini family. The sculptor Gian Lorenzo Bernini created this in 1642-43. 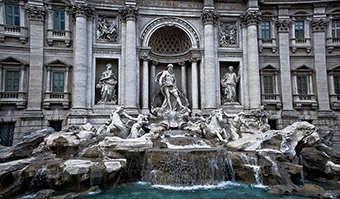 From the morning Triton fountain, we go to the most famous fountain in Rome: the Trevi Fountain at mid-day. This 18th century fountain marks where the modern Acqua Vergine aqueduct comes into the city. The ancient Roman aqueducts brought fresh water into the city from many points around the city – the Trevi fountain, so named for being at the junction of three roads (tre vie) was one of the most important terminal fountains. An upgrade of the fountain was begun in 1732 and completed thirty years later through the efforts of a number of sculptors. The latest restoration was completed in 2015 and included the addition of LED lights to improve the drama of the fountain at night. The theme of the entire fountain is Taming of the Waters and the whole fountain basin is designed to have the waters tumble into calmness. At the center is Oceanus, water-gods hold back their horses and chariots below him. Throwing coins into the fountain (using your right hand and throwing them over your left shoulder) is supposed to ensure your return to Rome in the future.

In Respighi’s music, the horses and chariots can be heard approaching as can be the crashing of the waves and the tritons on their conch shells. All fades away at the end as the waters are tamed and you go to the next fountain. 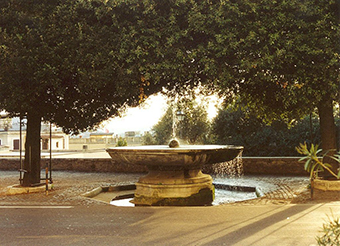 Respighi closes his fountain tour at the Villa Medici, high on Pincio Hill, at sunset. This, the earliest of Respighi’s fountains, was created by Annibale Lippi in 1589. A small fountain of water fills a large, flat bowl and drips into an octagonal pool. High on one of the seven hills of Rome, the fountain used to have a view of St. Peters, but now the trees obscure this vista. Respighi’s music seems to capture the golden light of sunset and the distant pealing of church bells before bringing back the opening theme – reminding you that Rome is eternal.