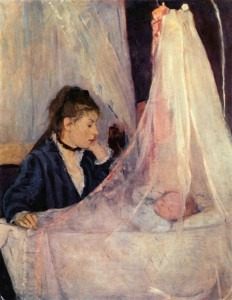 When Johannes Brahms delivered his Clarinet Sonatas Op. 120 to Richard Mühlfeld, he basically apologized for not having written a clarinet concerto. And what a glorious addition to the repertoire it would have been! As such, however, it was left to Luciano Berio (1925-2003) to bring Brahms’s Sonata Op. 120, Nr. 1 onto the concert stage. Commissioned by the Los Angeles Philharmonic in 1986, Berio fashioned an arrangement for clarinet (viola) and orchestra that pays close attention to the original. Although he added an extended introductory section and skillfully orchestrated the rest, the clarinet part remains essentially untouched. Berio’s arrangement retains the title “Sonata” but it could easily be considered a concerto.

Johannes Brahms: Clarinet Sonata in F minor No. 1, Op. 120 (arr. L. Berio)
The “Cradle Song” Op. 49, No. 4 was published in 1868 and became instantaneously known as “Brahms’s Lullaby.” One of Brahms’s most famous and recognizable melodies, it almost immediately achieved pop music status. As you might well imagine, arrangements in various shapes and sizes soon followed. Among them is a 1922 reworking by Australian pianist and composer Percy Grainger. A close personal friend of Frederick Delius and Edvard Grieg, Grainger became a champion of Nordic music and culture. The Brahms “Wiegenlied” is worked into a study for solo piano and was published in a collection entitled “Free Settings of Favorite Melodies.” Grainger places the first statement of the melody in the tenor range and surrounds it by ample suspensions and wide-ranging arpeggiation.

Percy Grainger: “ Brahms Wiegenlied” from 5 Lieder, Op. 49
A student of the famous Anton Rubinstein at the St. Petersburg Conservatory, the Russian pianist and conductor Eduard Schütt (1856-1933) used the “Lullaby” as the basis of a florid concert paraphrase. Schütt played the arrangement throughout Hungary, Bohemia and Austria and he also premiered his own two piano concertos in several major European cities. As a composer he published over a hundred works, including an opera, two piano concerti, two piano trios and a piano quartet, songs, and many piano pieces. In addition, he created very effective transcriptions and paraphrases of the music of Brahms, Wagner, Weber, Lanner and Strauss. A much sought-after conductor, he even declined an invitation from Cosima Wagner to become the music director for the Bayreuth Festival.

Eduard Schütt: “Paraphrase über das Wiegenlied on J. Brahms”
Well, it is time to put this series of Brahms transcriptions to rest with a rendition of the Brahms Lullaby by pop diva Celine Marie Claudette Dion. One of the best-selling female artists of all time, her recordings have sold nearly 200 million copies worldwide. In 1999, Dion halted her entertainment career in order to start a family. Her first son was born in 2001, and a pair of fraternal twins followed in 2010. We can be reasonably assured that Dion’s children frequently fell asleep to their mother’s bi-lingual rendition of the Brahms Lullaby.