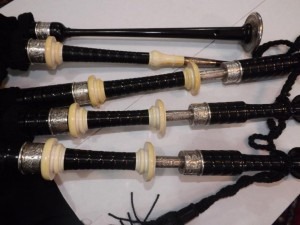 As if musicians don’t have enough problems—preparing for and taking auditions in other cities or countries, purchasing and insuring expensive instruments, practicing hours and hours, sustaining injuries from the repetitive motions or awkward postures necessary to play an instrument, and of course the endless hassles of transporting our instruments, there is a new hazard that musicians need to beware of—transporting IVORY—to be more precise elephant ivory.

Since the prohibition of importing ivory into the U.S. we musicians have another major headache. Few people realize that string players’ bows have exceptional value. Many of them were handmade by superb craftsmen such as François Tourte, the ‘Stradivari of the Bow’ who lived in the late 1700’s, as well as artists Peccatte, Voirin, Maire and more recently Hill and countless others.

When I was a fledgling player an older colleague tried to impress upon me the importance of pairing a bow with an instrument. I pooh-poohed the idea until I tried the French bow he had for sale—a Voirin—light as a feather. Magically my instrument spoke with sudden ease. I needed a light bow so as not to choke the sound. A bow’s precise weight, exquisite balance, springiness and responsiveness are essential to the quality of sound one can produce on our instrument. 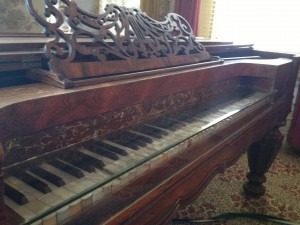 Now bows are a liability. Many bows have a small piece of ivory at the tip. Sometimes the frog too, the part that a string player holds, may be made of ivory and although it is not as common, ivory can also be found in violin pegs and tailpieces. Other materials that bow makers use are considered endangered or threatened such as tortoise shell, and even the pernambuco wood (that comprises a bow’s stick) and ebony. (The fingerboard)

Other instruments may have ivory—piano keys in older pianos, guitars, the bassoon bell ring (around the top of the instrument) and even bagpipes. Many of these instruments do not get dispensation as “antique” since they have been made within the last century. To qualify as an antique the following must be met:

• It is 100 years or older;
• It is composed in whole or in part of an ESA-listed species;
• It has not been repaired or modified with any such species after December 27, 1973; and
• It is being or was imported through an endangered species “antique port.”

There are several types of ivory. Instrument makers are resorting to mammoth, walrus or muskox. (Hippopotamus, sperm whale, mastodon also have ivory tusks.)

Elephant ivory is distinctive with crisscrossing lines called Schreger lines, which form into convex or concave patterns in a noticeable fashion but a quick glance is insufficient to differentiate one type of ivory from another. It is very important to know that the department of Fish and Wildlife Service uses the following language:

”The burden of proof is on the exporter/importer/seller,” That is you. 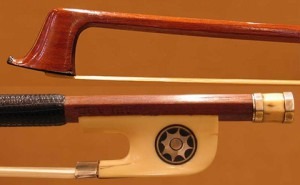 Violin bow by Francois Jude Gaulard, stick in pernambuco and frog in ivory with sun, 1820/25

You may import worked African elephant ivory as part of a musical instrument provided that the ivory was legally acquired before February 26, 1976; the ivory has not subsequently been transferred from one person to another person in the pursuit of financial gain or profit since February 26, 1976; the person or group qualifies for a CITES musical instrument certificate;.

The Fish and Wildlife Service has created a document—a passport for your instrument or bow essentially, called the CITES Musical Instrument Certificate which one can apply for. Note that it can take at least six weeks to procure and you need to prove that your ivory was produced before February 26, 1976. If your instrument was made more recently your choices are limited. Either you have to remove the ivory, or leave your instrument at home!

And it gets more complicated. What I didn’t realize is that since few customs agents are trained in what is or is not ivory, 18 ports have been designated as destinations from which you must fly before leaving the country to have your ivory examined. A form has to be filled out and faxed 48 hours before arriving to a designated port but sadly you have to get there during daytime hours 8:00-4:00 Monday through Friday. There is an extra charge if you should arrive at another time and need to set up a meeting with an inspector.

Recently, my husband and I drove from Minneapolis to Toronto and back. Certainly I didn’t know that I had to go to a designated port— to date there are no ports at the Mexican or Canadian borders. Even if I had the required paperwork in time it would have cost me an extra $288. each way to cross the Canadian border. How fortunate that I had just purchased a carbon fiber bow. I didn’t want to chance taking my good bow.

The rules were so restrictive, (imagine if you have a Monday morning audition in Montreal?) several music groups put that pressure on the government and rules were relaxed a bit in May of this year:

The revised rule allows musicians to travel with instruments containing ivory as long as they were lawfully acquired before Feb. 25, 2014. But the license and documentation are still required, which still causes consternation and confusion among musicians who must travel for their livelihoods.

More precise information for musicians with photos of documents needed.