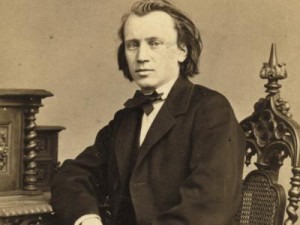 In music, nobody felt the anxiety of the past—specifically the looming shadow of Ludwig van Beethoven—more acutely than Johannes Brahms. Brahms told his friends that it was “horribly difficult to compose anything with Beethoven standing on his shoulders.” Over a period of 20 years, Brahms cautiously approached symphonic composition via different genres, carefully isolating the required elements. He experimented with orchestral colors in his Serenades, blended symphonic sketches with a sonata for two pianos to produce his first Piano Concert, solved thematic processes in his chamber compositions, and refined variation form and orchestration in his Haydn Variations. Interestingly, it is actually the version for orchestra of the Haydn Variations Op. 56a that represents the arrangement, as Brahms first composed the version for 2 pianos, Op. 56b.

Johannes Brahms: Variations on a Theme by Haydn, Op. 56b
When Brahms first visited Vienna in the early 1860’s he wrote to a friend that the city was filled with “the sacred memory of the great musicians whose lives and work are brought daily to our minds. In the case of Schubert one especially has the impression of his being still alive. Again and again one meets people who talk of him as a good friend; again and again one comes across new works, the existence of which was unknown.” Brahms significantly contributed to the resurgence of Schubert’s music by making orchestral and instrumental arrangements of a number of songs and a piano transcription of the Great Mass in E-flat. He also edited a set of eight Schubert Symphonies. In the 1860’s the prominent baritone Julius Stockhausen requested Brahms to orchestrate a number of Schubert Lieder for concerts in Bremen and Hamburg. Brahms happily obliged, and the fiery spirit of “An Schwager Kronos,” (To Coachman Chronos)—a setting of Goethe’s dramatic poem for male chorus and orchestra—is amplified in Brahms’s arrangement.

Franz Schubert: An Schwager Kronos (arr. Brahms/male chorus and orchestra)
The Hungarian violinist, composer and conductor Joseph Joachim was rightfully considered to be one of the most influential musical personalities of his time. At the tender age of 12, with Mendelssohn conducting, he performed the Beethoven violin concerto in London, and later served as concertmaster to Franz Liszt in Weimar. He introduced the painfully shy Johannes Brahms to Robert Schumann, and thus began a friendship that lasted for more than thirty years. Brahms famously entrusted Joachim to write the Cadenza for his Violin Concerto, and Brahms arranged several Joachim concert overtures. Joachim composed his Hamlet Overture in 1853, and Robert Schumann praised the poetic conception of the works and even conducted the work during his Düsseldorf tenure. The Brahms arrangement openly pays homage to Joachim the composer.

Joseph Joachim: Hamlet Overture, Op. 4 (arr. Brahms/piano 4 hands)
Inspired by the Meiningen clarinetist Richard Mühlfeld, Brahms emerged from compositional retirement to create a remarkable pair of works written for clarinet and piano in 1894. The Op. 120 sonatas are considered two of the most remarkable masterpieces in the clarinet repertoire. However, at the time of their publication, they were also specified for the viola. Since the viola can reach a step lower than the clarinet, many of the subtle changes between the clarinet and viola parts exploits the extended range. Brahms also fashioned a rarely heard arrangement for violin, which involved a number of rather substantial changes. Brahms made no such arrangement for the Clarinet Quintet Op. 115, composed three years earlier. As a result, modern performers have taken it upon themselves to present imaginative arrangements.