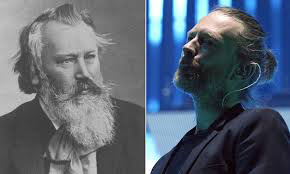 A number of music critics have called Frank Sinatra the “greatest singer of the 20th century.” The only child of an Italian immigrant couple, Sinatra entered show business at a very early age. And by the time he reached his mid-twenties, Sinatra was melting the hearts of teenage girls by the millions. Television and Movie appearances, alongside alleged personal professional links with organized crime figures placed Sinatra squarely into the limelight. He certainly was a master of self-promotion, and had a very keen eye for the ladies. However, Sinatra also recognized a good tune when he heard one. And thus, the main theme from the “Allegretto” of the 3rd Symphony by Johannes Brahms became a sultry pop song. “Take My Love” was recorded in November 1950, and released as an A side Columbia Records single in 1951.

Carlos Santana rocketed to fame and fortune in the early 1970’s with a pioneering musical style that fused Rock and Latin American music. A highly accomplished guitarist, Santana combined highly melodic blues-based melodies with Latin and African rhythms. He played at the legendary Woodstock Music and Art Festival, released a long string of highly successful records, and won 10 Grammy Awards. Santana also recognized a good tune when he heard one, but frequently could not remember where it had come from. His 17th album called “Supernatural” was released in 1999. By 2000 it had won nine Grammy Awards, Album of the Year, and Record of the Year. It went platinum 15 times in the US, and became his most financially successful album. The album includes the hugely popular track “Love of my Life.” Santana claimed that the track featured original music, however, he never told his audience that the material actually originates with Brahms’s 3rd Symphony!

The late 1980’s saw a number of artists crossing the musical genre divide. Mixing and blending elements of classical music with popular music became known as “Classical crossover.” The crossover genre became rather popular in an operatic context—we have all heard Andrea Bocelli, Sarah Brightman, and Emma Shapplin warbling through popular musical repertory–but it also appears within a symphonic context. In a project described as the “end of musical civilization as we know it,” conductor, composer, arranger, producer, pianist and singer/songwriter Steve Hackman mashed together Brahms’s First Symphony with the Radiohead album OK Computer. Hackman seamlessly fused the textures of Brahms’s symphony with arrangements of the pop tracks. Essentially, the Radiohead songs are superimposed above Brahms’s music, with melodies altered to coexist with Brahms harmonies. Motives from one work are interjected into the other, and the sound world adheres to the late romantic and densely contrapuntal style of Brahms. This kind of sampling across musical art forms generally relies on a creative juxtaposition and superimposition of pre-existing musical fragments. In the case of Brahms versus Radiohead, however, the differences between classical and pop have been merely blended away.