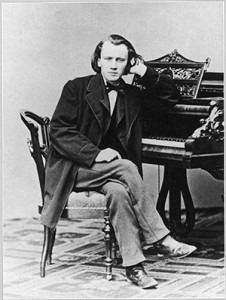 Johann Jakob Brahms was a double bass player in the six-man band that performed daily at the Alster Pavilion, Hamburg’s most fashionable meeting-place. Wealthy families and citizens of Hamburg liked to stroll and drive along the river, stopping for a bit of refreshment and music dispensed by the sextet. The Pavilion also attracted tourists, literati, and artists, among them Eduard Marxsen, Hamburg’s leading piano teacher and composer. Once Jakob Brahms had discovered that his son Hannes had perfect pitch, he began teaching him violin and cello, and the valveless “Waldhorn.” And by age 7, young Johannes became a piano student of Otto Friedrich Willibald Cossel, who in turn introduced him to his own teacher Eduard Marxsen. To gain experience as a composer, young Brahms started to make arrangements for the Alster Pavilion orchestra. None of these early effort has survived, however, Brahms subsequently became a prolific arranger of his own music.

Johannes Brahms: Tragic Overture, Op. 81 (arr. Brahms/piano 4-hands)
Arranging orchestral, choral and chamber music for piano was a standard method for a new composition to reach the wider public. Brahms predictably arranged many of his own works, but he also turned his attention to the music of other composers. While Robert Schumann was waiting for the end of his days in the asylum at Endenich, Brahms arranged for piano duet—no doubt intended for private performances by Clara Schumann and himself—the Schumann Piano Quartet Op. 47. While the original version had been heavily criticized for its overwhelming and dominating piano part, Brahms’s arrangement is so effective that it essentially rivals the original. 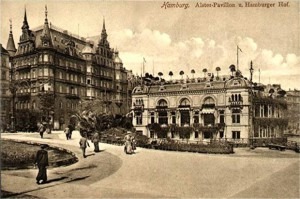 Brahms held particularly strong views on how arrangements should be done. This was particularly true when other musicians were looking to arrange his music. However, Brahms demonstrated varying levels of interest and intervention in their work. On occasion, he showed great interest in the fine details of the process, making suggestions and remarks on their work. At other times, he was simply content to trust the expertise of colleagues without interference. During his lifetime, over 65 different arrangers produced at least 350 arrangements of his works. Brahms met Theodor Kirchner at the Music Festival of the lower Rhine in 1856, and they became close friends. Kirchner was himself a talented composer and arranger of Brahms’s works. In a letter from Brahms to his publisher Fritz Simrock from 18 March 1883 he writes, “The Trios give me extraordinary pleasure! If it was your idea, then I must congratulate you, but Kirchner has done a remarkable job.”

Johannes Brahms: String Sextet No. 2, Op. 36 (arr. Theodor Kirchner/ Piano Trio)
Johannes Brahms composed his Op. 78 violin sonata during the summers of 1878 and 1879. One of the problems that had occupied the composer at his earlier attempts at a violin sonata had been the question of balance between the string instrument and the more powerful keyboard. Brahms’s solution was to treat the texture in the manner of a song, with the violin clearly projecting the melody parts and the piano supplying a thinner accompaniment. In his arrangement of the Brahms sonata, Paul Klengel suggested his own personal solution 20 years later. As the house arranger for Simrock publishing, Klengel transposed the work down to D major, and substituted the cello. The arrangement was published in 1897, the year of Brahms’s death.

Johannes Brahms: Violin Sonata No. 1, Op. 78 (arr. P. Klengel/cello)
When the British pianist Fanny Davies sought permission to arrange Brahms’s music, the composer is to have remarked, “do it as you wish, but just do it beautifully.” Join us for more beautiful Brahms arrangements next time.