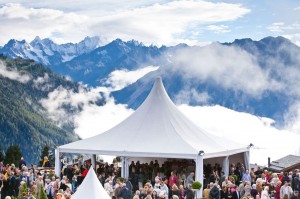 Picture this :- Eighteen days and nights of glorious music offered by a parade of world-class artists, talented Academy musicians and three Verbier Festival orchestras under the direction of renowned conductors; multiple masterclasses from 9:30am every day, held all day in several venues; lectures, workshops, music-themed playground activities for the young and/or young at heart, outdoor concerts at the top of the mountains, films, rehearsals; then to top it off, “after dark concerts” of unscripted programs at 11:00pm till late. All that time, I behaved like a child in a candy store, overwhelmed by the wide and varied selections, frantically rushing from one event to another, totally consumed by greed – wanting to have it all but never felt I had enough! 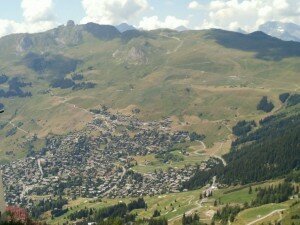 The above scenario summed up my long anticipated pilgrimage to Verbier, Switzerland, to partake in the Verbier Festival‘s 25th anniversary festivities from July 19th to August 5th, 2018. On the final day, I was exhausted but definitively exhilarated – my aging batteries fully charged! The dogged determination that propelled me to this festival, after years of viewing on medici.tv, proved to be justified.

Journey to this idyllic location was long and arduous – hours by air crossing continents and oceans, by train along picturesque Lake Geneva, through the majestic Swiss Alps, and finally by car navigating fourteen dizzying hairpin turns up the mountain, to arrive at Verbier Village right at sunset – just when a young cellist was performing one of Bach’s cello suites under a tent in the village square, surrounded by charming chalets, with audiences scattered around, a few orchestral members toting their instruments, strolling by languidly, amidst flower beds all decorated with musical icons and VF signs, and in full view of the spectacular alpine glow. This place was as close to a corner in heaven as I have ever been, and the festival has just begun.

As I prepared to write this article, the following quote came to mind:-

8: For every one that asketh receiveth; and he that seeketh findeth; and to him that knocketh it shall be opened. 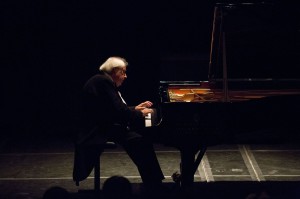 In a religious context, the quote refers to the actualization of prayers. However, it aptly expresses my sentiments pertaining to the Verbier Festival :- I “asked” for quality and had been “given” the sublime; “sought” excellence and had “found” abundant inspirations; “knocked” on doors of celebrities (or their agents) for interviews, and had opportunities generously “opened” to me. The result is a series of articles themed “Greatness @ Verbier”. Being in close proximity to artists in this intimate setting, I was able to experience random “close encounters”. Here are some anecdotes:-

Grigory Sokolov was the strong magnet that attracted me to Verbier. Not only because he is one of the world’s greatest and most revered artists, but because he has declined tours to Asia and North America, due to his aversion to jet lag. No terms of negotiation could tempt him to change his mind, I was told. If he is not coming to my home town to play, I will endure jet lag and travel to wherever he wishes to play!

Sokolov delivered a magnificent recital here, of three Haydn sonatas in the first half (spun out all in one breadth), and four Schubert Impromptus D935 in the second half, followed by numerous encores. Clearly I was mesmerized by his magic, but what was even more stunning, was being able to observe Yuja Wang in plain sight, who was seated right in the front row, with her eyes fixated intently on Sokolov. It appeared she hardly blinked the entire time – an indication that, she too, was a Sokolov fan. Backstage, I had the privilege of shaking his hand, and capturing his warm smile. My friend Juliette was imploring him to reconsider a tour to Asia, urging him to not say “no”, nor say “yes”, but say “maybe”, and he responded with an affectionate nod and a most gracious smile – a touching and unforgettable moment!

Daniil Trifonov was the other magnet. On the day of his recital, my husband and I were seated at the adjacent table to him and his wife in a restaurant. Inadvertently, my concentration was on him rather than on my lunch. He, like all young people, was quite preoccupied with his phone, occasionally sharing images with his wife. 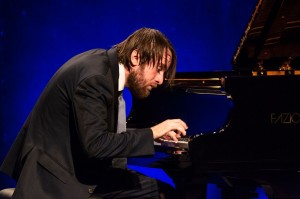 I was a little concerned because he looked rather frail and weary. However, as a mother and grandmother, I was also pleased that he was consuming a steak with lots of vegetables, presumably building up energy for the evening performance. After some agonizing minutes, I could not help myself but proceeded to request a photo together. He rejected my move politely as I was disturbing his peace, which made me so guilty I could hide in a hole. My husband, gifted with a higher EQ than I, later went up to thank him for his music, mentioned that we had “discovered” him in 2010 at the Chopin Competition in Warsaw, and that we already worshiped him back then, before he became a household name. He seemed to thaw after that statement, and became very charming and friendly.

That evening, Trifonov delivered an out-of-this-world, godlike recital. One could hear a pin drop in his “Funeral March” movement of the 2nd Chopin Sonata. A couple of days later, we were informed that Denis Matsuev had canceled his Prokofiev’s 1st and 2nd Concerti appearance, and that he would be replaced by Trifonov in the latter. His rendition of that concerto, given such short notice to prepare, turned out to be incredibly powerful, as if he pondered every single note to maximize its meaning. Trifonov surely has positioned himself as a mighty force to be reckoned with. Like Sokolov, he is an immensely intense artist, who always gives his whole heart and soul during every performance, and that is why he seems completely depleted at the end. Nonetheless, I secretly wish that he would pace his career and nurture his rare talent with an exceptional dose of tender loving care. Being a nagging mother, I also wish he would get a haircut!

Radu Lupu was my idol for years, since I heard him at the Leeds Competition in 1969, and subsequently when he collaborated with Murray Perahia in duets. That day, when Lupu was scheduled to perform Beethoven’s 4th Piano Concerto, the talk of town was that he had not been well at rehearsal, and the concerto would be delegated to András Schiff. 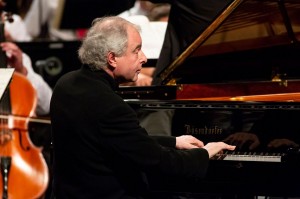 Meanwhile, Schiff was conducting a master class when a knock on the door informed him of his unexpected engagement less than eight hours away! I was devastated by that news, particularly about Lupu’s health condition. However, I was also worried because Schiff had not impressed me at his concert three nights prior, when he assumed the role as conductor of the Verbier Festival Chamber Orchestra, as well as piano soloist and conductor of two concerti – Bach’s 5th in F minor and Beethoven’s 1st in C major. In my opinion, neither conducting nor multi-tasking was his forte. However, I was committed to attending that evening’s concert, as Beethoven’s 4th is my all-time favourite concerto. Fortunate for both Schiff and myself, that concerto performance, conducted by Gábor Takács-Nagy, was absolutely astounding! Schiff readily proved himself to be one of the greatest pianists of our time – master of brilliance and elegance. He definitely redeemed himself in my books, for all that was worth.

The Verbier Festival newsletter has been announcing artists’ cancellations – Martha Argerich, Pamela Frank, Amanda Forsyth, Denis Matsuev etc… This time it was Ivan Fischer, who was due to conduct the Verbier Festival Orchestra but was indisposed. Three conductors were promptly scheduled to replace him. 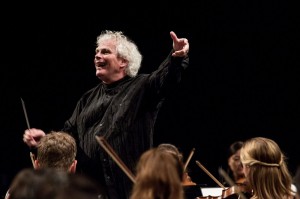 The first two, François López-Ferrer and Gábor Tákacs-Nagy, were not surprises, but the third, Simon Rattle, came as a complete but pleasant shock. He made his Verbier Festival debut conducting the formidable Beethoven’s 5th Symphony! What a spellbinding performance! The Verbier Festival Orchestra, comprises young instrumentalists between the ages of 18 and 28 (under the direction of Valery Gergiev beginning this season) resonated wholeheartedly with Rattle, literally sounded like a youthful version of the Berlin Philharmonic, electrified the hall, and left us audience totally in awe! They demonstrated absolute professionalism – impeccable skills, enormous energy, plus vigor, drama, sophistication, and maturity. Rattle visibly connected with each one of the orchestra members. Massive amounts of adrenalin were exploding from the stage. For me, it was the highlight of the festival! Once again, Martin Engström and his team did not fail to astonish the audience with their miraculous problem solving ingenuity.

The day after that memorable evening, I bumped into Rattle running down the street with his three children, dressed in t-shirt, shorts and cap, apparently after attending a youth orchestra concert on the mountains. His wife, the venerable mezzo-soprano Magdalena Kožená, was to perform her own recital that evening, so I assumed Rattle took on parental duties while his wife rehearsed and prepared for her concert. Nevertheless, I was flabbergasted by the sight of him as an “ordinary guy”! Only at Verbier would I experience such joy and wonderment.

Last but not least, my most precious encounter was with a giant of the music world, bass-baritone Thomas Quasthoff. 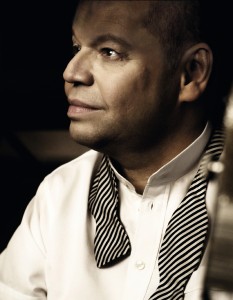 Throughout the week, I ensured that I did not miss a single one of his four master classes in lieder. As a faithful collector of his CDs and videos, I was even more enamoured by his voice and personality after witnessing him in a teacher’s capacity. He was the quintessential gentleman, genuinely considerate and polite in his criticisms to the singers being coached, even though one could see his occasional veiled frustrations when not getting through. He was super sensitive to the audience’s comprehension of the process, often entertained us with his dark humour, without ever being condescending or patronizing. His comments were poignant but constructive, his attitude kind and caring, and his musical approach demanding yet philosophical. It was a memorable lesson in music and life!

After the last session, I had the distinct honour to shake Quasthoff’s hand, and spoke with him briefly. He was completely drained from giving so much of himself at the master class, so instead, we continued our conversation with his wife, a former journalist, who obviously is a great help to her husband. Quasthoff is such a remarkable talent, who obviously has had to overcome insurmountable hardships to arrive at his epic success. I believe he has now established himself as a great jazz singer, and will be touring in Hong Kong in 2019!

Thomas Quasthoff: Georgia on my mind